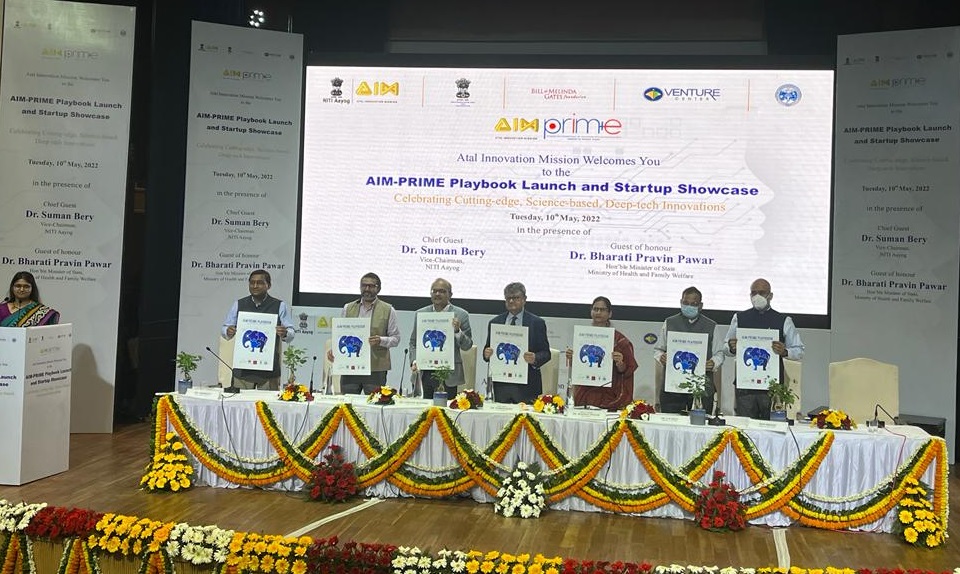 New Delhi: The AIM-PRIME Playbook was launched today at the Dr. Ambedkar International Center, New Delhi, in the presence of the Chief Guest Mr. Suman Bery Vice-Chair, NITI Aayog, Guest of Honor Dr. Bharati Pravin Pawar, Hon’ble Union Minister of State, Ministry of Health and Family Welfare (MoHFW) and Shri. Amitabh Kant CEO, NITI Aayog. This event marks the culmination of the nationwide AIM-PRIME program, an initiative of Atal Innovation Mission, NITI Aayog, that is being implemented by Venture Center, Pune and is supported by the Bill & Melinda Gates Foundation and Office of Principal Scientific Advisor. Post the launch event, the dignitaries interacted with selected cohort start-ups and incubators at a startup showcase.

The AIM PRIME (Program for Researchers in Innovation, Market Readiness and Entrepreneurship) program was aimed at promoting early-stage science-based, deep technology ideas to market through training and guidance over a period of 12 months using a blended learning curriculum. Other program benefits include the PRIME Playbook, a guide for science-based entrepreneurs and ventures, the PRIME Library, a curated resource shared by the faculty and expert mentors associated with the program, and the PRIME Videos, an open-access video collection of the lectures delivered as part of the PRIME Classroom.

Talking at the event, Chief Guest Mr. Suman Bery, Vice-Chair of NITI Aayog, said “Startups represent an important part of the economy that shape the future industries of the world and thus can shape the jobs, products and economy of the future. Science-based startups are particularly exciting due to their potential for delivering large scale social impact (like for example, via vaccines, drugs, diagnostics, climate change resistant crops, carbon capture technologies etc) but also providing India the opportunity to leap-frog into the future and position itself as a leading innovation-led country of the world. Programs like AIM PRIME can nurture vehicles that can attract capital into high risk-reward pursuits — something that can be important for achieving higher growth rates in the country.”

Guest of Honour, Dr. Bharati Pawar, Hon’ble Union Minister of State, Ministry of Health and Family Welfare (MoHFW) said: “During COVID, we saw startups rise up to the occasion and make very important contributions in diagnostics, PPEs, ventilators and last mile vaccine delivery. This demonstrated the potential that Indian startups hold in solving problems in the Indian healthcare sector. We also realized that developing products in sectors like healthcare need deep technical knowledge and new inventions, and thus there is a need to nurture science-based deep tech startups. India has chosen to invest in science and build indigenous R&D capacity for many years now. Many of these capabilities are very relevant to building solutions for the most pressing problems of our society. The key challenge is to convert these publicly funded R&D capabilities into products and services in the market. In this context and given the honourable PM’s call for Atma Nirbhar Bharat, the AIM PRIME program is serving a very important purpose. It has come at just the right time to catalyse the ambitions of India becoming an innovation superpower with very strong indigenous manufacturing capabilities in all important and critical sectors.”

Dr. Chintan Vaishnav. Mission Director of the Atal Innovation Mission said: “The AIM-PRIME program was focused on promoting science-based deep-tech entrepreneurship, which is a knowledge intensive pursuit. The first year of AIM PRIME was also aimed at exploring and demonstrating methods and content for accelerating such startups that are India-appropriate, and making it available to all innovators and entrepreneurs. I am pleased to see that the first year of this program has been able to train a group of trainers who can scale the program in multiple locations. Further, it has also led to creation of a Playbook and course videos that are available to everyone freely under an open access model. These are all valuable contributions of a quality comparable to any top innovation ecosystem of the world.”

The first cohort of the AIM PRIME program consisted of science-based startups, faculty entrepreneurs and incubator managers, where they worked on progressing their idea by teaming up with an incubator. The cohort included 40 organizations and 64 participants, representing 23 different cities across 7 states. The cohort represented a wide variety of science-based sectors, including industrial automation, IoT, electronics, robotics, energy and environment, health and rehabilitation, and food, nutrition and agriculture. Over 17 national and international faculty members were on-boarded as part of the program, who have collectively spent more than 640 hours on mentoring.

Speaking at the launch event, Dr. Premnath, director Venture Center said, “The Venture Center team and the AIM PRIME faculty and mentors are so excited to see the final outcomes of the program with most startups making significant progress in their investor readiness and the cohort even raising almost Rs 20 crore in funding within the duration of the program itself. 18 patents were filed and 6 patents and 2 trademarks were issued. Over 15 key partnerships have been forged with marquee companies such as Mahindra, and Kimberly Clark during the course of the program.”

Notes to the Editor:

Published in Policies and Technology