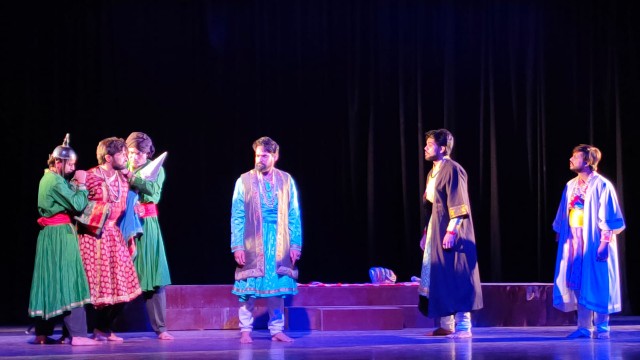 Each and every actor, the costume and make up department, lights and music department and the whole setup was done so efficiently that it made audience travel to the era of the plays performed while giving them a thrill of emotions the plays carried. The efforts of both the backstage and the onstage team were very well synchronized to present an effortless performance, leaving the audience awestruck.

The mind behind all the beauty, the director of the plays, Mr. Rajesh Kumar Tiwari is a Bollywood actor, Film and theatre director and acting coach. He’s graduated from NSD (1987-90) and had worked in movies like Padman, Lipstick under my Burkha, Made in Heaven, TV serials like Sai baba, Yeh Rishta kya kehlata hai, and many such popular projects alongwith being the chief of Rep. Co. Shri Ram Centre for performing arts for 10 years and 2 years with LTG. He has done more than 1500 theatre plays.

In the famous playwright Girish Karnad’s Tughlaq, the protagonist, Mohammed Bin Tughlaq, had great ideas and a grand vision but his reign was an abject failure. Tughlaq was known for his reformist ideas, one of which was shifting the capital from Delhi to Daulatabad in order to have a capital at the centre of his province. While showing the consequences of his decisions, the end inscenes of the play shows utter chaos and misery leaving Tughlaq alone.

Bhishm Sahani’s epic play ‘Kabira Khada Bazar Mein’ shows how a simple man’s thought and intellect, by witnessing years of injustice to humankind, prejudice, and blind faith, turned him into a mystical poet. Kabira upholds the truth that religion comes after humanity in the simplest manner of it’s kind. Inspite of the torture in the name of religion, class and status in society, Kabira refuses to yield and stand behind the sufferer.

These must watch plays in the world of theatre were performed by Aavran Art society, who, since 2002, has constructed a big name in Indian performing arts by performing the highest number of plays in theatre industry. Their innovative programs are designed for a new generation’s artists who share a passion for performing arts while having faith in future of film and theatre that’s extremely creative and realistic. Its a national Film and Theatre space offering numerous acting and film making courses to its students, all the courses being most valuable, intensive an easy to understand.