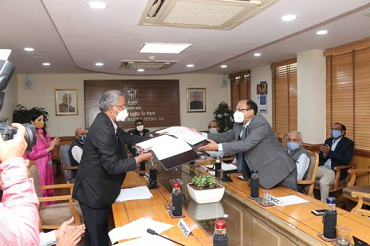 New Delhi. Minister of Petroleum and Natural Gas & Steel Shri Dharmendra Pradhan today said that Open Acreage Licensing Policy (OALP) is a market friendly policy which is driving self-reliance in energy sector. He was speaking at the signing of contracts for 11 oil and gas blocks offered under the OALP Bid Round-V.

Shri Pradhan said that successful roll-out of the HELP regime, followed by OALP Bid Rounds, has led to increase in exploration acreages in India. The exploration acreage which stood at about 80,000 sq. km. from earlier regimes now stands at approx. 2,37,000 sq. km., post the award of blocks under OALP Round-V.

Calling it a transformative policy, the Minister said that the OALP has removed red-tapism and brought in a quantum jump in Exploration & Production sector. He called for moving away from business-as-usual approach and strive for exponential growth and speed, asking the winners to bring in new technology and new business models, so as to expedite the production of oil and natural gas from these areas.

Speaking about technology, Minister Pradhan said that greater digitisation and data mapping tools have aided in fundamentally transforming the E&P landscape and called for greater infusion of technology and state-of-the-art data management systems.

Shri Pradhan offered all support to the OLAP winners in carrying out their activities by facilitating the relevant approvals from the Central Ministries and also the State Governments.  Shri Pradhan said that the winners should farm out these areas so as to bring in international players into the exploration activities and run the business in a professional manner.  Shri Pradhan also suggested that an independent body should be set up for data gathering and data management so that all the bidders have access to the relevant information for making an informed investment decision.

A total of 11 blocks in 8 sedimentary basins covering a total acreage of 19,789.04 sq km has been awarded under OALP Bid Round 5, with Rs. 465 crore of immediate exploration work commitment. ONGC has been awarded 7 blocks where 4 blocks went to Oil India Limited (OIL).