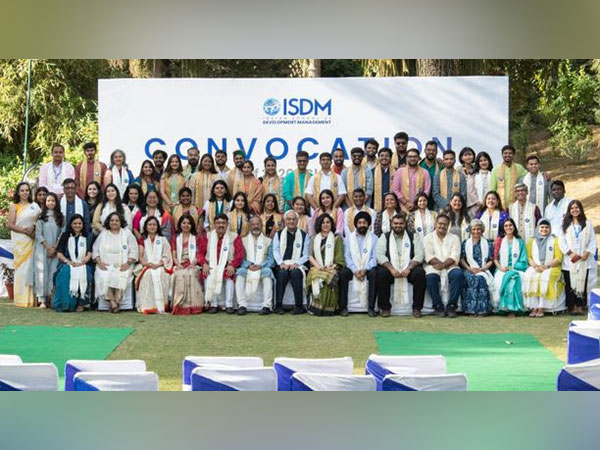 New Delhi: The Convocation for the 3rd and 4th Batch of ISDM, which was initially postponed due to COVID-19, finally took place on 27th March, 2022 at the beautiful and sprawling TERI-Gram campus in Gurgaon. The bright ethnic hues of the graduates apparel played beautifully against the lush green backdrop of the campus, which provided for a very jovial and picturesque ceremony.

This was the most anticipated event in ISDM’s history for a few reasons. One was that Batch 3 had been forced to leave campus, and abruptly start taking classes online due to the outbreak of COVID-19. This was the first time that they would be able to all meet again. Some students from Batch 4, fondly referred to as the ‘COVID Batch’, had never even met their classmates in person! However, it was apparent from the get-go that online classes did not deter these students from forming long-lasting bonds as the grounds were bustling with the energy of alums gleefully reconnecting and fondly rekindling past memories.

The Guest of Honour was the respectable Mr. Bibek Debroy, Chairman, Economic Advisory Council to the Prime Minister. During the Keynote Address, Mr. Debroy spoke at length about how authentic Development Professionals can lead for change in India.

Founder and Director, Mr. Ravi Sreedharan, spoke about how the landscape of the Social Sector has changed in recent years, and how Development Sector Professionals like the alums of ISDM have been impacting change at scale. Associate Program Director, Ms. Naghma Abidi, who has seen ISDM students come and go, talked about some of the precious memories she shared with both the batches. The ceremony was followed by a few alums giving a vote of thanks and quipping about their experiences while studying at ISDM.

Before the official Convocation ceremony, many of the alums and Founders of ISDM also had a chance to have an informal heart-to-heart discussion during the ‘Guftagu’ session. Many alums candidly spoke about their experiences in the social sector. Among these, Mahima Goel, who is currently working at Pravah as an Associate Coordinator, shared that ISDM gave her the confidence she needed to excel in her role. Isha Sharma, who is currently working at CSRBox as a Senior Communication Associate, expressed that it was the different people and diversity of experiences at ISDM that allowed her to learn and grow. For Abhishek Paluri, Co-founder and CEO of HUmanity Uplifting, ISDM was the one place that helped him learn everything that he needed to run his own organization.

Overall, the weekend was full of laughter, bittersweet nostalgia, and the re-strengthening of bonds that were forged not too long ago on mutual human values and the desire to do more. ISDM is proud to have these individuals as its ambassadors; individuals who will surely be the future leaders of sustainable, impactful change in the social sector.