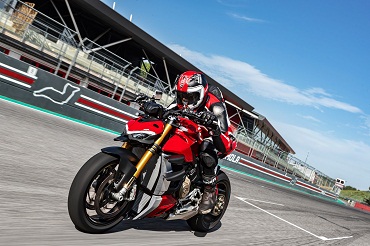 New Delhi, 13th May : Luxury motorcycle brand Ducati today announced the launch of the much awaited Streetfighter V4 and V4 S, which is also the first all new BS6 Ducati to be launched in India. Based on the ‘Fight Formula’, the Streetfighter gets an aggressive and emotional design with the naked bike design exposing its powerful V4 engine.

Keeping in line with the mean design, the front of the Streetfighter evokes the grin of the Joker, highlighting that two distinct side of the motorcycle; an exciting Super Naked for the road and also a thrilling companion on the racetrack. The distinct Ducati family design is also evident in V-shaped DRL, already featured on the Panigale V4 and SuperSport. Harking to its streetfighter culture, the naked bikes’ clip-on handlebars have been replaced with a high, wide bar that, together with a moderated foot peg position, makes the riding position sporty yet agile, perfect for ripping up the road. No doubt then, that the Ducati Streetfighter V4 was elected as the ‘Most Beautiful Bike’ at EICMA 2019.

Mr. Bipul Chandra, Managing Director of Ducati India said, “The Streetfighter V4 embodies the spirit of a mean beastly super naked, that is loaded with performance to back it up. The Streetfighter’s naked bike design does a fantastic job of putting that nature of the bike right at the center. An unrivalled super naked bristling with cutting-edge technology and an awe-inspiring design that oozes pure, accessible performance, whether it’s on the road or on the racetrack. The motorcycle was much awaited by enthusiasts and Ducatisti alike and we are excited that it is finally available in India for everyone to experience.”

The Streetfighter weighs in at just 180 kgs (Dry) and boasts of a Euro 5 compliant 1103 cm3 Desmosedici Stradale engine. In this configuration, the 90° V4 delivers 208 Hp at 12,750 rpm, an unrivalled power level within the naked segment, perfectly in keeping with the all-out character of the new Streetfighter V4. Maximum torque is 123 Nm at 9,500 rpm, practically unchanged with respect to the Panigale V4. This feisty Streetfighter V4 performance is kept under control by sophisticated electronics lifted directly from the Panigale V4 and the ‘biplane’ wings developed by Ducati Corse aerodynamicists. Brought forward to maximize their effect, the wings generate 28 kg of downforce at 270 kph, attenuating the front wheel ‘floating’ at high speed and the tendency to wheel-up. They also boost stability during braking at the turn-in point and through the corner. On the road, this dynamic behavior instils confidence. On the track, instead, it boosts performance by limiting electronic control intervention and allowing delayed braking..

Power and torque can be raised to 220 hp and 130 Nm by fitting the full-racing Ducati Performance exhaust by Akrapovič which also reduces the weight of the motorcycle by 6 Kgs.

In terms of suspension, the Streetfighter V4 mounts 43 mm Showa Big Piston Forks (BPF) to provide full adjustability in spring pre-load and compression and rebound damping. The fork bodies house chrome sliders with Brembo radial caliper mountings. A Sachs steering damper completes the front-end package. At the rear there is a fully adjustable Sachs shock absorber, one side of which is attached to the Desmosedici Stradale engine via a forged aluminium bracket.

The Streetfighter V4 S, instead, is equipped with an Öhlins 43 mm NIX-30 fork, an Öhlins TTX36 rear shock absorber and an Öhlins event-based steering damper. On this version, suspension and steering damper are controlled by the second-generation Öhlins Smart EC 2.0 system which, among other things, features the new OBTi (Objective Based Tuning Interface).

The bike provides the riders with three different preset riding styles so that the bike’s performance can be adapted to rider, track/route and weather conditions. Thanks to the full Ride by Wire system, this allows complex electronic control strategies and modulation of engine ‘feel’ according to selected riding mode. Changing the Riding Modes instantaneously changes the character of the engine, the electronic control parameters and, on the S version, the suspension set-up too. These modes include Race Riding Mode, Sport Riding Mode and Street Riding Mode.

The Streetfighter V4 also features a 5″ full-TFT high resolution colour screen and has the ability to mount the Ducati Multimedia System (DMS). This lets riders take incoming calls, select and listen to music tracks or receive text messages via a Bluetooth link. When the rider mounts the motorcycle, the smartphone automatically connects to the bike via Bluetooth, letting the rider control the main multimedia functions. Phone call audio and music are transmitted to the helmet earpieces. DMS is available as a Ducati Performance plug-and-play accessory.

Priced at INR 19.99 Lacs, the Streetfighter V4 is available in the Ducati Red color. Streetfighter V4 S is priced at INR 22.99 Lacs for Ducati Red and INR 23.19 Lacs for Dark Stealth color. Bookings are now open across all Ducati dealerships in Delhi – NCR, Mumbai, Pune, Ahmedabad, Hyderabad, Bengaluru, Kochi, Kolkata & Chennai and deliveries will begin as soon as lockdown restrictions are lifted.