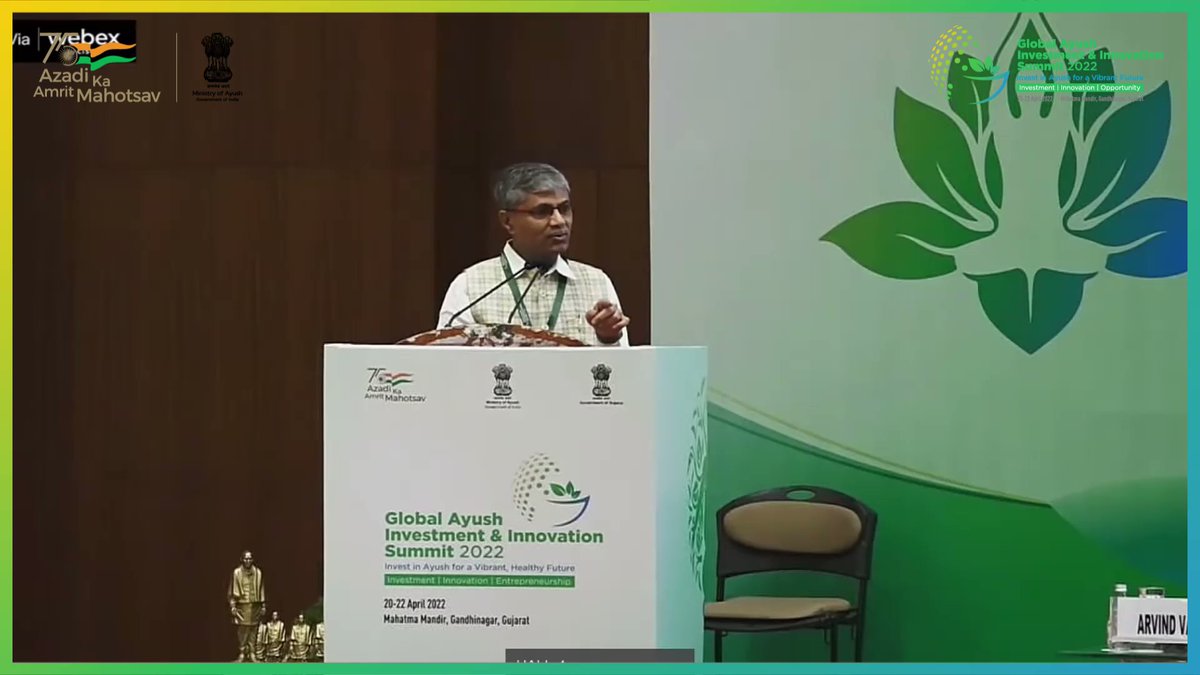 New Delhi: The growing environmental concerns and consciousness among organisations and leaderships across the globe is now reflecting in the conduct of these entities. The eco-friendly measures and arrangements during the two events of the Ministry of Ayush, held in Gujrat recently, proved the same. An estimated use of more than 1 lakh plastic bottles, 15000 plastic tags and 50 thousand plastic cutleries was avoided during the eventsleading to an estimated reduction of 119437.5 kgof carbon dioxide equivalent (Co2e).

Furthermore, countries, organisations and entities across the world are coming together to curb evils such as single use plastic. While speaking at the 14thsession of the Conference of Parties (CoP-14) to the United Nations Convention to Combat Desertification (UNCCD), the Prime Minister Narendra Modi mentioned, “Single-use plastic is not only harmful to the health of the people, but it is also a major reason for the deterioration of the health of the land.”

With the recently concluded events of the Ministry of Ayush in Gujrat highlighted the intent of the Government to lead with example in this direction.The Prime Minister laid the foundation of the world’s first WHO Global Centre for Traditional Medicine (GCTM) during the ground-breaking ceremonyheld at Jamnagar on 19th April and inaugurated the 3-day Global Ayush Investment and Innovation Summit (GAIIS) on 20th April in the presence of Prime Minister of Mauritius Sh. Pravind Kumar Jugnauth and DirectorGeneral of the World Health Organisation Dr. Tedros Adhanom Ghebreyesus. The mega eventsechoed the resolve of the country to curb single use plastic with dedicated efforts to minimize carbon footprints.Both the events were of global prominence that captured the attention of global community of policymakers, healthcare professionals, investors and stakeholders and were thronged by thousands.

The eco-friendly practices were adopted to organize the events in line with the thought of the Prime Minister and in order to promote healthy and environment friendly practices, the participants were provided with kits that included copper bottles for drinking water. Water dispensers were installed at convenient locations to complement these efforts. While talking about the arrangements, the organizers mentioned, “Environmental consciousness remained the core of decision making for organisation of the event such as avoiding the use of plastic flex banners and other such material with an objective to minimize carbon footprints.”

The visitors attending various sessions at the event also complemented the organizers for their efforts and eco-friendly measures. During the event, participating experts and speakers also expressed the potential of Ayush to achieve sustainability and net-zero.

The event also featured creative exhibitions on environment related issues and solutions. Interestingly, the exhibit on ‘Smart & Sustainable Ayush Factories for the Future’, showcased steps toward efficient waste disposal for a clean, green, and sustainable future and also demonstrated the way to live without plastic which is commonly taken as unavoidable and most convenient. Talking about the exhibition and environmental initiatives, Mr. Anand Chordia, Founder, The Eco Factory Foundation, mentioned, “The exhibition is an effort to showcase various aspects of the problems and solutions related with environment including, different waste auditing and segregation processes and their effective management, grey water management and possible recycling, use of renewable source of energy, converting barren empty lands to biodiversity parks to retain or regain native flora and fauna, concept of green building, with an aim to achieve Net Zero by applying simple and replicable methods.”

Further, Dr. Pratik Mehta, an Environmentalist, mentioned that the Microplastic evil was recently reported in 80% of the human blood samples tested, he also insisted on adopting an approach of living and sustaining without plastic as much possible.

The organizers of the event were ecstatic while sharing the outcome of their eco-friendly efforts in the form of numbers. It was mentioned that considering the scale of the two events, it is estimatedthat use of more than 1 lakh plastic bottles, 15000plastic tags and 50 thousand plastic cutleries were avoided during the event. Furthermore, it was estimated that if the carbon emission scenario is taken into account, it turns out that the three-day event succeeded in reducing the Co2e emission to the tunes of estimated 119437.5 kg considering footfall of 27000 in both the events combined.