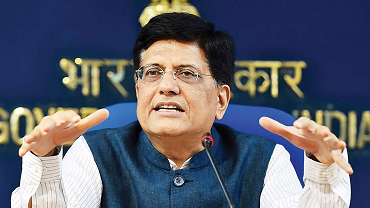 Government today thinks like a startup, relentlessly focusing on newer and better ideas to improve efficiency and integrity of systems and processes: Piyush Goyal

New Delhi. : Union Minister for Commerce and Industry, Consumer Affairs, Food and Public Distribution and Textiles, Shri Piyush Goyal today said that the Government today thinks like a startup, relentlessly focusing on newer and better ideas and striving to saturate them throughout the country to improve efficiency, effectiveness, productivity, transparency and integrity of systems and processes. He was addressing the gathering after distributing the National Startup Awards 2022 in New Delhi today. The Minister congratulated all the winners and expressed hope that the Award would inspire them further expand their horizons.

Applauding the Prime Minister, Shri Narendra Modi as being both a generator and incubator of brilliant innovations to address the challenges that we as a nation face, Shri Goyal said that under his visionary leadership, the idea of startup India had taken root throughout the length and breadth of the nation.

The Minister observed that many more innovative ideas and initiatives must be nurtured to ensure that the nation grew at a much faster pace than ever before in the Amritkaal and to meet the aspirations of a young India. He said that the initiatives taken by the government under the leadership of the Prime Minister in the last few years, were timely and had been successful in building the foundation for a powerful, resurgent India, a nation recognized as an emerging growth story, set to drive global growth.

Shri Goyal noted that the Prime Minister placed great focus on speed, skill and scale in the execution of projects. Citing the example of Digital India Mission launched in 2015, he said that early on, the Prime Minister had recognized that unless Digital India was taken to the remotest corners of the country, the vision of equitable development wouldn’t become a reality. Initiatives like Digital India, 4G and now 5G rollout, broadband connectivity in villages drove the growth of this highly technology dependant startup ecosystem, especially in small towns and in remote parts of the nation, he opined.

The Minister said that the government came up with highly impactful innovations like COWIN app, One Nation, One Ration Card (ONORC), PM GatiShakti National Master Plan, UPI which has powered so many startups and unicorns, Open Network for Digital Commerce (ONDC) which will democratise e-Commerce and save millions of mom and pop stores across the country and JAM Trinity that ensured that the truly deserving received assistance from the government directly, ushering in honesty, integrity and transparency in entire system.

The Minister appreciated the ‘MAARG’ portal and said that it would help focus, refine and fine-tune ideas. He referred to the investor connect portal and said that it would help innovators from remote parts get access to crucial opportunities and give many deserving startups access to the funding ecosystem. Technology can be an enabler to leapfrog into the new age where the fruits of development can be taken to every last citizen, helping them achieve a better quality of life, he said.

Referring to the MAARG portal, the Minister said that the focus of the government is to simplify the interaction of citizens with the government. In line with this approach of the Government, PM had removed the need to notarise documents, placing trust in the common man and this has never been misused, he noted. He urged startups to give suggestions to improve processes to make it simple, economic.  He also mentioned that over 39000 compliances have been reduced, he asked for suggestions on what more can be decriminalized to reduce compliance burden.

The Minister emphasized on the need for a more robust database on startups to connect them in a better manner with the government, industry bodies and the general public and to capture more ideas of our innovators. Shri Goyal concluded by reiterating that this is a government that listens and wants to engage more with everyone to build the future of India.

Shri Som Prakash, Minister of State for Commerce & Industry, spoke about how government has been providing handholding and support to the startups of the country, in terms of funding, mentorship and much more. Mr Sanjeev Bikhchandani, Jury, National Startup Awards, congratulated the contribution of Startup India, DPIIT and highlighted the pivotal role of the government in promoting startups.

A ‘National Startup Awards 2022 Report’ was also released on the occasion today. The report provides detailed insight into the support provided to previous National Startup Awards recognized startups and the National Startup Awards 2022 winners. The MAARG platform which stands for Mentorship, Advisory, Assistance, Resilience, and Growth was also launched during the felicitation ceremony today. This platform is envisioned to facilitate mentorship between startups and entrepreneurs across sectors, stages, and functions. There are over 600 mentors and over 800 startups registered on the platform currently. The portal will now allow for live matchmaking of mentors with startups, helping startups to access the guidance that will help them grow and increase their impact in India and globally.

The third edition of the National Startup Awards was launched on 1st February 2022. In line with Azadi Ka Amrit Mahotsav, National Startup Awards 2022 acknowledges startups and enablers who have been instrumental in revolutionizing the development story of India and in demonstrating exceptional capabilities not just in terms of financial gains but also for the measurable impact on society.

National Startup Awards 2022 focused extensively on diversity, inclusion, and innovation. The sectors and sub-sectors covered under the National Startup Awards 2022 have been increased to 17 and 50 respectively from the previous editions, thereby increasing the coverage of the startup ecosystem. 2 sectors, 5 sub-sectors, and 2 special categories have been added to this edition. Manufacturing Excellence and Startups from North-East and Hilly States and Union Territories are the two new special categories added to further encourage startups.

A total of 2,667 applications were received from startups, incubators, and accelerators from 31 states and union territories across the country. These applications were screened and evaluated by more than 50 jury members. These jury members include senior Government officials, Venture Capitalists (VCs), startup CEOs, Industry stalwarts, and renowned educationists, among others.

In this third edition, 41 startups, 2 incubators, and 1 accelerator were recognized as winners in their respective categories. Winners have emerged from Tier-2 and Tier-3 cities, indicating the spread of the spirit of entrepreneurship and innovation across the last mile in the country.

The winning startups (per category) will be awarded Rs. 5 lakh each, and the winning incubator and accelerator will be awarded Rs. 15 lakhs respectively. The results for National Startup Awards 2022 can be found on the Startup India website. (https://www.startupindia.gov.in/nsa2022results/).