New Delhi: To mark a befitting conclusion of the celebrations across 75 locations spread throughout the country, Insolvency & Bankruptcy Board of India (IBBI) organised a one day long iconic event at the Habitat Centre, here today, to trace the journey of reforms in the said three stages of a business. 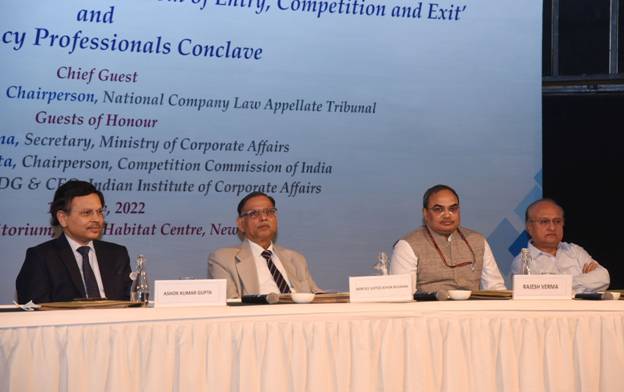 Mr. Ravi Mital, Chairperson, IBBI delivered the welcome address. Hon’ble Justice Ashok Bhushan, Chairperson, National Company Law Appellate Tribunal in his address as Chief Guest deliberated on the journey of economic reforms by noting evolution from risk averse nature of society to reduced stigma for failure. He stated that earlier the individuals looked primarily for employment stability, but the outlook towards entrepreneurship has improved significantly with reforms.

Shri Rajesh Verma, Secretary, Ministry of Corporate Affairs lauded the achievements of the Code and initiatives undertaken by IBBI under the Azadi Ka Amrit Mahotsav. He stated that future reforms including cross border insolvency framework are on anvil and will be introduced soon. He discussed the role of IBC in the context of corporate governance and economic reforms, that has promoted entrepreneurship in the Country. Mr. Ashok Kumar Gupta, Chairperson, CCI while addressing participants dwelt upon the interplay between insolvency law and competition law. He highlighted the economic reforms relating to competition law and its positive impact on entrepreneurship.

A publication titled, “Anusandhaan: Exploring New Perspectives on Insolvency” containing 26 research papers that emerged out of an international research conference organized by IBBI and IIM Ahmedabad recently was released during the inaugural session of the Conference. Further, IBBI also felicitated IPs who coordinated the conduct of 75 awareness programmes across the country, as part of Azadi ka Amrit Mahotsav.

Large number of stakeholders of the IBC ecosystem, from across the country, including insolvency professionals, registered valuers, economists, financial creditors, service providers, researchers, students, professionals, regulators, academia and government officers joined the Conference both in physical well as online mode.

Azadi Ka Amrit Mahotsav (AKAM) is an initiative of the Government of India to celebrate and commemorate 75 years of progressive India and the glorious history of its people, culture and achievements. Since the beginning of AKAM celebrations which was started on 12th March, 2021 by the Hon’ble Prime Minister Shri Narendra Modi, IBBI has organized a large number of activities and events as part of the Mahotsav.