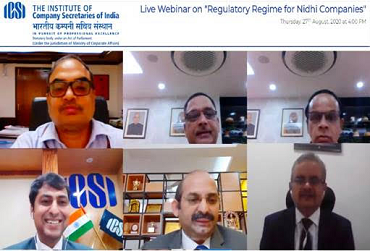 New Delhi. The Institute of Company Secretaries of India, organised a Live Webinar on “Regulatory Regime for Nidhi Companies”to reiterate on the fundamentals of the legal framework regulating and governing the Nidhi Companies as per Section 406 of the Companies Act 2013 and the practical aspects relating thereto.

The Ministry of Corporate Affairs, Government of India, had amended the provisions related to Nidhi Companies under the Companies Act (Section 406) and the rules made there under in August 2019, to accomplish the objective of transparency and investor friendliness in corporate environment in the country.

Shri Rajesh Verma congratulated ICSI on organising a timely and much required webinar and highlighted upon the reintroduction of the mandatory requirement of declaration to the Central Government. He urged the Company Secretaries to propagate the opportunity available under the Company Fresh Start Scheme to the Nidhi Company Officials and handhold them to ensure all compliances are met with. He said “Company Secretaries should render all support to the genuine companies and ensure filing of NDH-4 required to update the status with Central Government and educate them on all necessary compliance related thereto”.

Deliberating on the provisions relating to Nidhi Companies and the role played by Professional Institutes Shri Manoj Pandey said “ICSI should, through its various offices and its members, sensitize the management of Nidhi Companies on complying with the rules and provisions of the Act on Nidhi Companies He further emphasized that “Nidhiis a novel concept thatpromotes the culture of savings, deposits and loan and acts in the interest of its members, especially middle class and lower middle class who are availing the benefits from these Nidhi Companies. Hence, they have an important role to play in the economic growth of the country, provided they act diligently in true letter and spiritof the provisions of the law.”

Shri S. K. Vashishtha ,educated the audience with a presentation on how Nidhi Companies have evolved over the years and the various amendments to the provisions and rules applicable to the Nidhi Companies. He elaborated on the requirement of declaration by the ofNidhi Companies over the years and said that “The Government has been making efforts to maintain anequilibrium between the growth of Nidhi Sector and protection of interest of stakeholders”.

Speaking on the occasion, CS Ashish Garg, President ICSI said”Implementation of laws in a transparent manner has a critical bearing. While handholding the management of Nidhis’ in compliance of the Nidhi Rules, Company Secretaries have an important role to play in Ease of Doing Business efforts. Understanding the true intent of the lawmakers and policy framers, Company Secretaries not only have been playing but shall continue to pursue a noteworthy role in strengthening the nation and its various pillars.”

As a torchbearer of the Government’s Financial Literacy framework in the country, ICSI has been educating the masses on saving and investing and has been creating awareness on the importance of financial education, thus strengthening the base and making the country, a pool of intellect, to reckon with