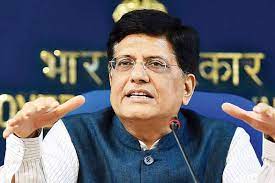 New Delhi: India has made a strong pitch for protecting the interests of the developing and under-developed countries at the WTO. Plain speaking, Union Minister of Commerce and Industry, Consumer Affairs, Food & Public Distribution and Textiles, Shri Piyush Goyal, representing India at the 12thMinisterial Conference of the WTO in Geneva, raised concerns about the “skewed” WTO reforms proposal, imperative need to retain the Special and Differential Treatment (S&DT) provisions for the developing world, global inequities in Covid vaccination and Public Stockholding of foodgrains.

Speaking on the ‘Challenges confronting theMinisterial Session’ yesterday, Shri Goyal said the current proposals for WTO Reform couldfundamentally change its institutional architecture,skewing the system against the interests of developingcountries. “We need to move ahead preserving the coreprinciples of consensus and ensuring S&DT, withpeople and development being at the core of WTO’s future agenda,” said Shri Goyal.

“Friends, those who question the need for S&DTprovisions are aware that the per capita GDP of thedeveloped countries is 20 to 50 times that of thedeveloping countries. Even India is at the lower end ofthe per capita GDP supporting 1.4 billion people. Ibelieve, the developing world aspires to work for abetter future. Is it humane, fair or even equitablethat the developing world takes the same obligationsas the developed nations?,” he added.

Shri Goyal said the COVID Pandemic has exposed the inability of theworld to promptly respond to any crisis, whether onfood security or health, economic well being or opensupply chains.

“When the world was desperately lookingfor relief, the WTO was found wanting. As an example,vaccine inequity persists even two years after COVID.When people in LDCs and several developingcountries are yet to be vaccinated, there are somecountries who have already administered the 3rdor 4thdose,” he said, adding, “This is a collective failure of global governance& we need to introspect. Those responsible need toseriously reflect deep within their hearts, it will help uscraft a more equitable, fair and prosperous future forevery citizen of the world and finally achieve theSustainable Development Goals we had all collectivelyagreed upon.”

To rebuild trust and credibility, Shri Goyal said, we must first addressmandated issues, like the Permanent Solution toPublic Stockholding agreed nearly a decade ago.

“The current global food crisis is a reminder to us thatwe act now! Can we risk the lives of millions of peopledependent on food stocks maintained for the poor andvulnerable?,” Shri Goyal asked.

“During the pandemic, India alonedistributed 100 million tonnes of foodgrain free ofcharge to 800 million Indians at a cost of nearly US$50billion. This was over and above the foodgraindistributed as a part of our National Food SecurityProgramme thus ensuring that nobody ever slept hungry,” he said.

“We cannot institutionalize the privilegesof a few countries and take away the right to progressfor those who are working for the vulnerablemarginalized sections of society. Particularly for thosecountries, who are not engaged in harmful deep seafishing, we need to have different views. Otherwise, wemay have a similar situation like the Agreement onAgriculture, where inequities & asymmetries persist,causing several countries to still depend on food aid,” he said.

On climate issues, Shri Goyal proposed we need to adoptenvironmentally-conscious lifestyles, more sustainablelifestyles, based on 3Ps of “Pro Planet People”.

“The WTO needs to rebuild trust. It is time todemonstrate goodness, concern for people, moresensitivity to the poor & vulnerable sections of societyin the spirit of “Vasudhaiva Kutumbakam”, which webelieve in India as “The World is one Family”,” he said.