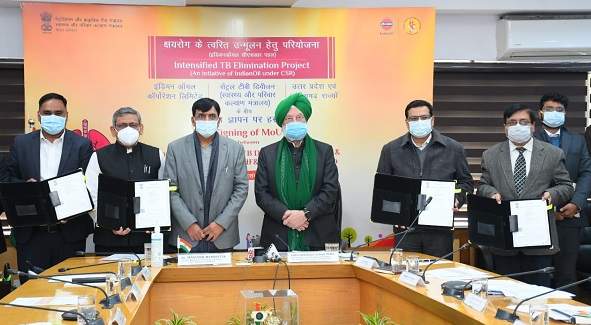 New Delhi: In a historic milestone that underscores India’s commitment to counter the menace of Tuberculosis, IndianOil (Indian Oil Corporation Limited) signed a Memorandum of Understanding (MoU) with the Central TB Division (CTD) under the Ministry of Health and Family Welfare (MoH&FW), and the states of Uttar Pradesh and Chhattisgarh to undertake intensified TB elimination project. The MoU bolsters Prime Minister Shri Narendra Modi’s vision to end Tuberculosis in India by 2025, five years ahead of the Sustainable Development Goal (SDG).

This ambitious campaign will follow a multi-pronged approach to ensure early identification of presumptive TB and prompt detection using diagnostic tests at the doorstep. The drive also aims to offer sustainable and equitable access to free TB treatment, care, and support services to the people of Uttar Pradesh and Chhatisgarh.

Speaking on the occasion, Union Minister Shri Hardeep Singh Puri said, “I compliment IndianOil and its top leadership for not just taking the proactive initiative of signing this milestone MoU to fight Tuberculosis but bringing it to the point of concrete implementation. The Ministry of Health and Family Welfare has been taking innovative steps in this direction, and now, with IndianOil’s support, I am sure the mission against this disease will be taken forward with a firm determination and blueprint. This milestone is an affirmation of the Indian energy sector’s commitment to align with the Hon’ble Prime Minister’s vision to bolster India’s healthcare system. It is appreciable how the energy PSUs have been upholding that commitment by continuously leveraging their CSR outreaches to strengthen India’s healthcare infrastructure. This was aptly demonstrated during the COVID-pandemic. “.

Union Minister of Health and Family Welfare Dr Mansukh Mandaviya applauded IndianOil and both the states for their collective efforts to strengthen the Prime Minister’s mission to eliminate TB by 2025 and said, “Public partnerships and a holistic approach will be crucial to steer initiatives like TB eradication. I thank the Ministry of Petroleum & Natural Gas for their sustained contribution to nurturing affordable and accessible healthcare facilities through their CSR forays”. The Union  Minister also appreciated the facilities that IndianOil is extending to counter the spread of TB, like the introduction of mobile testing vans that can reach out to the remotest corners of the two states.

Earlier, welcoming the dignitaries, Mr Ranjan Kumar Mohapatra, Director (HR) IndianOil, remarked, “IndianOil, as India’s largest Energy PSE, has always been going beyond business priorities to align with national commitments. Our resolve to strengthen national health infrastructure was at the forefront during the most ravaging phases of the COVID pandemic when you will recall how IndianOil realigned its business resources to shore up the medical oxygen support and enhance Covid-care infrastructure in the nation. We will now be pursuing the cause of TB-Mukt Bharat with a missionary zeal. Endeavours like these reflect IndianOil’s commitment to the mantra of ‘Pehle Indian Phir Oil’”.

With this pathbreaking foray, IndianOil has emerged as the first corporate to implement a large-scale Active Case Finding campaign (ACF) in all 75 districts of UP, covering approximately 10% of its population once a year for three years. Under this project, IndianOil will also introduce Mobile Medical Vans equipped with modern diagnostic technology in Uttar Pradesh. This would aid the diagnosis of TB in rural and remote areas and hard-to-reach communities, improving early case detection and treatment.

IndianOil is also introducing a cost-effective, diagnostic machine, Truenat, which will improve access and availability of TB diagnostic services in remote tribal areas. IndianOil will provide these machines in all Tuberculosis Units of the 8 Aspirational Districts of UP (Bahraich, Balrampur, Chandauli, Chitrakoot, Fatehpur, Shravasti, Siddharthnagar & Sonbhadra) and Community Health Centres (CHC) in the state of Chhattisgarh. Moreover, the Companywill provide handheld Xray Units in UP covering all 18 State Head Quarters and 8 Aspirational Districts. Xray Units will also be provided in 5 Divisions of Chhattisgarh.

TB is considered the world’s top infectious killer and infects about 10 million people yearly, killing almost 1.5 million and India has about one-fourth of the global TB cases annually.