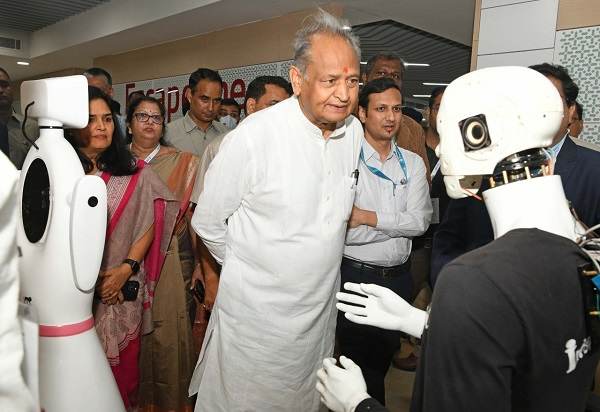 IT being used in every field, Says Chief Minister Ashok Gehlot

Jaipur, : Rajasthan’s Chief Minister Ashok Gehlot said that the state is making progress by leaps and bounds in the field of Information Technology. Due to the successful use of IT, Rajasthan is now a leading state in the country in the field of Good Governance. Rajiv Gandhi Yuva Mitras have an important role to play in taking this forward. Former Prime Minister Shri Rajiv Gandhi had a visionary dream to take India into the league of developed nations through the use of IT. Today, the person standing in the last row is getting the benefit of public welfare schemes through IT. Crucial decisions with far-reaching results are being taken by the state government with the vision of ‘Technology for All’.

Shri Gehlot was addressing the valedictory of Rajasthan Digifest organised at Birla Auditorium on Saturday. He said that the youth of today are drawing inspiration from the futuristic vision of the past. They have shown enthusiasm, dedication towards work and zeal towards innovation. Today, every village-hamlet of the state is directly connected with the government through IT.

Yuva Mitra to take flagship schemes to the masses

Shri Gehlot said that the state government is committed towards the all-round development of the state. The state government is running several flagship schemes in the field of education, health, water, electricity, agriculture, roads, social security etc. He called upon the Rajiv Gandhi Yuva Mitras to work with full commitment and devotion and assist the state government in taking the benefits of the schemes to the people. He said that not a single family of the state must be deprived of the ambitious schemes like Chief Minister Chiranjeevi Health Insurance. He said that Rajiv Gandhi Yuva Mitras will play an important role in building a prosperous Rajasthan.

The Chief Minister inaugurated world class incubation centres in Kota, Bikaner and Churu . The centres have been set up in these three districts after Jaipur, Udaipur and Jodhpur to provide better facilities to startups in the state. Guidance from experts in the IT sector will also be available here. Shri Gehlot also felicitated the e-governance awardees of the last three years. Apart from disbursing the incentive amount of Rs 41.15 lakh to 74 students under the School Startup Programme and Rural iStart Programme, he also launched three websites ‘WebMyWay’, ‘Sotto’ and ‘RajSambal’ and Rajiv Gandhi Yuva Mitra Samvad App.

The Chief Minister said that the use of Information Technology put Rajasthan on global map in Corona management. During this period, over 500 video conferences were held, in which members up to the gram panchayat level were involved. IT also played an important role in the management of medicines and medical equipment, and in the survey of the labourers and street vendors who lost their livelihood during the lockdown. Financial assistance was also sent to the accounts of about 35 lakh people through DBT.

Shri Gehlot said that under the Rajiv Gandhi Scholarship for Academic Excellence, 200 meritorious students are being sent for higher education in reputed educational institutions of the country and abroad at government expense. He said that so far 1.30 lakh government jobs have been given by the state government. Recruitment to around 1 lakh posts are under process and 1 lakh jobs have been announced in the budget 2022-23. Rajasthan is becoming a leading state in providing government jobs in the country.