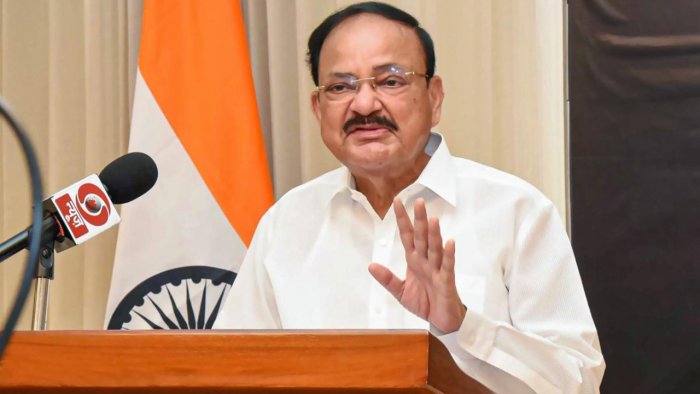 New Delhi: The Vice President, Shri M. Venkaiah Naidu today said that, as proud Indians, we are dutybound to celebrate the lives of the freedom fighters who made innumerable sacrifices to free the nation from the clutches of oppressive British rule. He called upon the people to revisit the lives of these great leaders and make youth aware of their inspirational stories.

Addressing the gathering during the inauguration of 12th Rashtriya Sanskriti Mahotsav being organized by the Ministry of Culture in Hyderabad today, the Vice President highlighted the ‘twin purpose’ of this Mahotsav- one is to remember the sacrifices of freedom fighters, and the second is to promote and preserve rich Indian cultural heritage and art forms. He said that Indian civilization always sought the well-being of all in tune with the spirit of ‘Sarvejana Sukhino Bhavantu’ and ‘Vasudhaiva Kutumbakam’.

Referring to the diversity and richness of cultural art forms in India, he commended  the Ministry of Culture for celebrating this diversity through Sanskrit Mahotsav.

Observing that our rich and diverse languages are an inalienable part of our glorious cultural heritage, Shri Naidu emphasised the need to promote the use of Indian languages in every walk of life.

The Vice President suggested that people should visit various parts of the country to understand and appreciate the cultural uniqueness and diversity of each region in the country. He also wanted people to visit historical monuments, including places like the Statue of Unity and Cellular Jail to learn about the sacrifices of our freedom fighters. Shri Naidu also called for including the life stories of the freedom fighters and social reformers from various parts of the country in school textbooks to inspire the younger generation.

Describing India’s cultural treasure of music and dance as one of the greatest gifts to the world, the Vice President stressed the need to preserve and propagate these rich art forms. In this regard, he also emphasised the need for providing timely and affordable credit and marketing avenues to artisans to enable them to stand on their own feet. “We must ensure that our artists and craftsmen find means to lead a life of dignity and honour,” he stressed.

Praising the Ministry of Culture for promoting  and conserving our rich and diverse cultural heritage, Shri Naidu said that the Rashtriya Sanskriti Mahotsav, provides a good opportunity for traditional Performing Artists and Craft persons to come under one roof to showcase their talent. “This festival is a celebration of our glorious cultural heritage and rich art forms that have evolved over millennia, carefully nourished and preserved by our ancestors,” he added.

Observing that the Rashtriya Sanskriti Mahotsav is evolving into a platform for performance and exhibition of rare and near extinct art and craft forms, the Vice President opined that this festival will go a long way in making people, especially the younger generation aware of the richness of India’s culture and traditions. He also hoped that the Mahotsav would also enable our artisans to earn their livelihood through sales of artifacts and other traditional wares.

The twelfth Rashtriya Sanskriti Mahotsav, that began today, is being organized by the Ministry of Culture at Hyderabad, Rajahmundry and Warangal. Around 550 folk artists from 35 folk groups and around 150 artisans from Zonal Cultural Centres will participate in this Mahotsav. Apart from this, an equal member of local artists and artisans hailing from Andhra Pradesh and Telangana will also be part of this mega cultural event.

On this occasion, Shri Naidu also inaugurated an exhibition on prominent Telugu freedom fighters set up by the Ministry of Culture and Regional Outreach Bureau (ROB) Hyderabad. He also made a brief visit to other stalls showcasing culture from different parts of the country and also inaugurated a ‘Startup Zone’ that seeks to support early stage startups.