J&K tops among UTs in e-Governance services delivery, saves around Rs 200 crore annually that was incurred in carriage of physical files during the Annual Durbar move between the two capital cities of Jammu and Srinagar

New Delhi: Jammu & Kashmir tops among all the Union territories of India in e-Governance services delivery, which has also enabled it to save around Rs 200 crore annually that was incurred in carriage of physical files during the Annual Durbar move between the two capital cities of Jammu and Srinagar.

The Minister lauded the UT of Jammu and Kashmir for achieving this position with an overall compliance of nearly 90%. 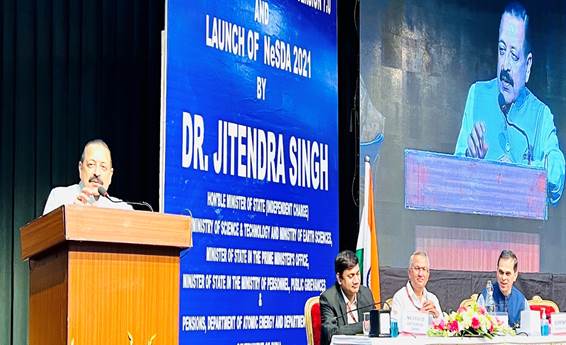 Addressing the National Workshop on e-Office and Launch of National e-Governance Service Delivery Assessment (NeSDA 202), Dr Jitendra Singh informed that in the Union Territories category, Jammu & Kashmir was assessed for the first time in NeSDA 2021 and scored the highest amongst all UTs for six sectors. He said, after coming into force of the Jammu and Kashmir Reorganisation Act, 2019 with effect from 31 st October, 2019, J&K became the first UT in the country to have Good Governance Index and was also first to launch District Good Governance Index for 20 Districts of the Union Territory of Jammu and Kashmir in January this year.

Dr Jitendra Singh said, the operationalization of two Secretariats in Jammu & Kashmir was possible because of e-Office and that has put an end to Annual Darbar move carrying over 300 truckloads of files between the two capital cities of Srinagar and Jammu. This also saved Rs 200 crore per annum and led to uninterrupted work culture in the entire UT without any official break of six weeks for organization of files in Jammu and Srinagar respectively.

The Minister said, the adoption of e-Office has enabled the simultaneous operationalization of both Jammu and Srinagar Secretariats and was one of the biggest reforms related to the practice of Darbar move.

Dr Jitendra Singh today released the second edition of the National e-Governance Service Delivery Assessment 2021, NeSDA 2021. The report has been prepared covering the assessment of States, UTs, and focuses on Central Ministries on their effectiveness in delivering online services to citizens. The report also provides suggestions for governments to further enhance their e-Governance service delivery systems. 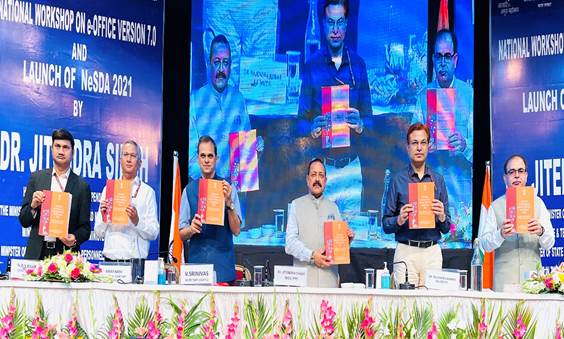 Dr Jitendra Singh said, 28 Ministries/Departments have already adopted e-Office version 7.0 along with digitization of the central registration units enabled creation of paperless secretariats where receipts move online, files move online and correspondence moves online. He said, the migration schedule of the remaining 56 Ministries/Departments has been drawn up and by February, 2023, all Ministries will have e-Office version 7.0. The limited file movement with 4 levels of submission and adoption of the desk officer system has ensured that non-performing officials can no longer hide files, the Minister added.

Referring to some of the success stories, Dr Jitendra Singh said, the uninterrupted functioning of the Central Secretariat in the pandemic and lockdown was possible because of e-Office. Deputy Secretaries, Joint Secretaries, Additional Secretaries and Secretaries had access to Virtual Private Network and could take policy decisions on e-files during this period.

Dr Jitendra Singh said, the adoption of e-Office in DRDO, represented a milestone as it demonstrated that Departments with multiple field offices could use e-Office for real time transfer of files. He informed that in 2022, DRDO collaborated with DARPG in propagation of the use of e-Office in DRDO and all field offices of DRDO and the Headquarters. Similarly, e-Office has enabled the seamless movement of files to IFD and Department of Expenditure. E-Office version 7.0 is a significant advancement on e-Office over 6.0 with a number of new features, enabling references to external offices. This has enabled seamless movement of files to IFD and Dept of Expenditure.

Dr Jitendra Singh said, India’s e-Governance policies have shown improvements and citizen satisfaction levels have risen and, in many ways, Technology has succeeded in Bringing Government and Citizens closer. 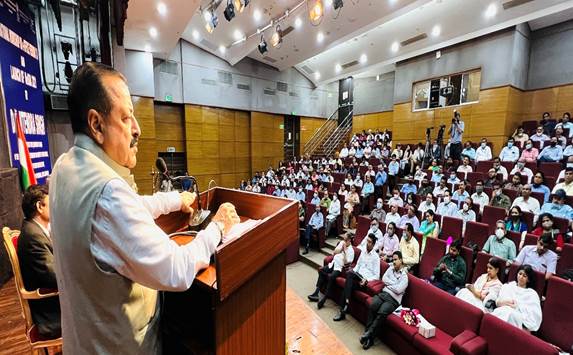 In conclusion, Dr Jitendra Singh expressed satisfaction that in assessment of State portals, Kerala became a front runner and the progress made by Tamil Nadu, Jammu &amp; Kashmir and Uttar Pradesh in NeSDA 2021 was also commendable. In Service portals, Rajasthan, Punjab, Jammu & Kashmir and Meghalaya have topped the rankings. All States/ UT’s have shown improvements in the promotion of integrated service portals and the number of services being offered on their state portals.

In his address, V.Srinivas, Secretary, DARPG said, that DARPG currently monitors adoption of e-Office on its dashboard on a daily basis on its dashboard, submits progress reports on e-Office implementation in its monthly DO letters to the Cabinet Secretary and circulates information to the Council of Ministers. Further DARPG had instituted certificates of recognition to institutions that achieve 90 percent of e-Office digitalization. The significant increase in number of instances and users under e-Office was possible because of these untiring efforts.

In NeSDA 2021, 1400 services across all States and UTs were assessed as compared to 872 in 2019, an increase of over 60%. 74% respondents of the nation-wide citizen survey conducted during the study had stated that they are satisfied with the e-Services provided by the States and UTs. The e-Services of Finance and Local Governance &amp; Utility Services sectors were the most widely used by citizens. The rising trend of e-Services delivery shifting from single silo departmental portals to integrated / centralized portals has resulted in higher citizen satisfaction.