Ministry of Culture organises ‘Story Telling’ as part of Kalanjali campaign, a unique cultural spectacle being organised at Central Vista every week

New Delhi. : Under the aegis of Azadi ka Amrit Mahotsav, Sahitya Akademi, an autonomous organisation of the Ministry of Culture, Government of India, organized Storytelling  at the India Gate Lawns in New Delhi as a part of campaign named Kalanjali, a unique culture spectacle, under which cultural programmes are being organised at Amphitheatre Central Vista, India Gate every week. 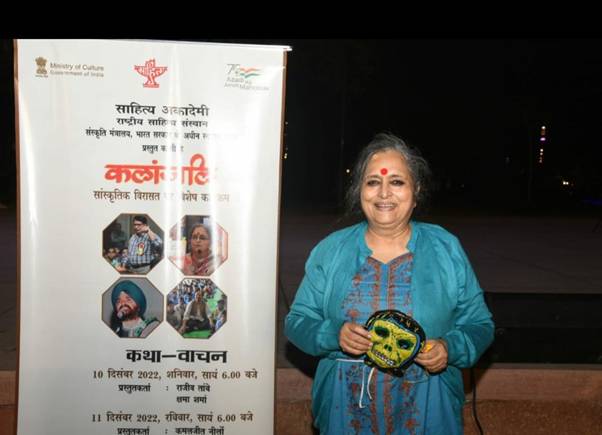 On 10th December, 2022 ,Shri Rajiv Tambe and  Kshama Sharma presented story in an interactive manner which  held  the interest of both children and adults. Shri Rajiv Tambe is  a writer of children’s stories and a Sahitya Akademi Awardee for Children’s Literature. His style is unique and immersive. Besides being a writer, he also works with few select non-government organizations (NGOs) and the United Nations International Children’s Emergency Fund. He has to his credit 80 published books in Marathi, Hindi, Gujarati and English.

Kshama Sharma has received the Sahitya Akademi Award for her contribution to Children’s Literature. An eminent writer in Hindi, she has to her credit over 50 published works. She has also been associated with the editing of several children’s magazines. She will be presenting her story with interesting dialogues.

The 2 day event will be organized on 11th of December 2022 also. On 11th December Kamaljit Neelon and Devendra Mewari,will present their stories.

Oral traditions have always been popular in India. It is a way of preserving the culture and beliefs of a tribe or community and passing them down to the next generation. That is the real significance of oral traditions. However, storytelling does not need to be limited to oral recitation. It can take form through drawings, paintings, dance or even puppet shows. India’s storytelling traditions are as diverse as the culture of the country,

Narrating stories is a means used to teach lessons, morals and to entertain people, particularly in rural areas. Before TV, the internet and smartphones, people were coming together to hear stories about their history, folklore and current events. India being a land of diverse cultures, every state follows its own style of storytelling. While some narrate, others employ props like puppets, masks and even musical instruments. There are some that are told through the medium of dance and music.

Katha is an Indian style of religious storytelling, performances of which are a ritualistic event in Hinduism. It often involves professional storytellers who recite Hindu religious texts such as Puranas, The Ramayana or Bhagavata Purana, followed by an explanatory commentary. South India has a long tradition of storytelling and religious discourse. Religious scholars were knowledgeable in the scriptures used for discourse in temples and monasteries. Purana-Pravachana is a lecture about scriptures in which the pauranika is a spiritual interpreter of the scriptures. These stories generally have a religious theme, usually the life of a saint or a story from an Indian epic.

Wall paintings in temples and shrines across India also serve the purpose of interpreting and storytelling with a religious theme.

Kamaljit Neelon  is the recipient of the Sahitya Akademi Award for Children’s Literature. A well-known name in Punjabi children’s literature, her writings incorporate cultural and social values, which motivates both children and adults to move towards a positive direction. Nine albums of Punjabi songs written by her continue to be aired by Doordarshan and other television channels. She will be presenting her stories with the musical accompaniment of the Dhapli and Harmonium.

Devendra Mewari is a recipient of the Sahitya Akademi Award for Children’s Literature. A distinguished writer in Hindi, he has 25 published books to his credit. He has also worked on a rare genre of audio plays in Hindi on Science and Technology. His presentation will be innovative and interesting.