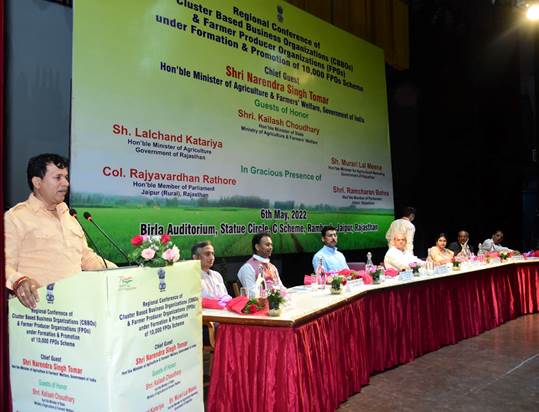 New Delhi: Union Minister of State for Agriculture and Farmers Welfare Shri Kailash Choudhary inaugurated the Conference of Cluster-Based Business Organizations (CBBOs) and Farmer Producer Organizations (FPOs) under the Scheme of Formation and Promotion of 10,000 FPOs on 06th May 2022 at Birla Auditorium in Jaipur.

Appreciating CBBO for the efforts made so far, Shri Choudhary directed the CBBOs and Implementing Agencies to further focus on supporting FPOs, motivating farmers to contribute the equity and support them. He also added that there is a significant role of CBBOs and FPOs in doubling farmers’ income and fulfilling the visionary dream of the Prime Minister and therefore, CBBOs, should come forward to contact local elected representatives to mobilize small and marginal farmers to join the FPO movement. FPOs are given priority in government schemes. Further, he encouraged CBBOs and FPOs to do continuous hard work for benefit of farmers of the country.

Various issues were discussed in the conference including discussion on expectations from CBBOs, Knowledge sharing by CBBOs on best practices, discussion on Training and Capacity Building of Stakeholders, and Open discussion on various issues/ suggestions related to the successful implementation of the scheme.

At the conference considering CBBOs significance and FPOs experience in the field level implementation,150 representatives of CBBOs and 350 representatives of FPOs from Goa, Gujarat, Maharashtra and Rajasthan participated along with all the implementing agencies, different categories of specialists from the domain of Crop Husbandry, Agri Marketing and senior officers from State Government attended the conference.

Dr N. Vijaya Lakshmi, Joint Secretary (Marketing), Ministry of Agriculture & Farmers’ Welfare, Government of India, addressed the gathering and shared the progress of the scheme which also includes benefits provided to FPOs under the scheme.

Dr. Ramesh Mittal, Director, CCS National Institute of Agricultural Marketing, Jaipur offered a vote of thanks to the dignitaries and the participants of the conference.

About ‘Formation and Promotion of 10,000 Farmer Produce Organizations (FPOs)

The government of India had formulated a new Scheme titled ‘Formation and Promotion of 10,000 Farmer Produce Organizations (FPOs)’ which was formally launched by the Prime Minister of India on 29.02.2020 at Chitrakoot (Uttar Pradesh) with a budgetary provision of Rs. 6865 crores. In the conference, emphasis is given on small and marginal farmers to form FPOs and enhances economic strength, bargaining power & market linkages of farmers for their empowerment.

The scheme is based on the produce cluster approach and to enhance the production, productivity, market access, promote diversification, value addition, processing, and export and create Agriculture based employment opportunities with the result of economically empowered farmers. While adopting a cluster-based approach, the formation of FPOs will be focused on ‘One District One Product’  for the development of product specialization.

The FPOs to be eligible under the scheme for financial benefit and technical handholding are required to be registered either under the Companies Act, 2013 or States’ Co-operative Societies Act. Under the scheme, there is a provision for financial support of a maximum of Rs.18.00 lakh per FPO for 3 years as a management cost to make them sustainable and economically viable. FPO with a minimum farmer-members size of 300 shall be eligible under the scheme in plains, while in North-Eastern and Hilly areas* (including such other areas of UTs), a size of 100 shall be eligible for equity grant. To strengthen the financial base of FPOs, there is also a provision for a matching equity grant of a maximum of Rs. 2000/- per member with a ceiling of Rs. 15 lakh /FPO and Credit Guarantee facility up to a bankable project loan of Rs. 2.00 crore respectively.

Under the scheme, CBBOs have been provisioned with the critical role to engage themselves all along the value chain starting right from the mobilization of farmers, baseline survey, identification of produce clusters, formation of groups, registration, and capacity building to the preparation of the business plan, execution thereof with assurance to provide the market to the FPOs. They are also to establish a cardinal link with Implementing Agencies and FPOs.