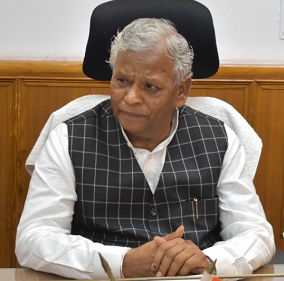 New Delhi. : Minister of State for Jal Shakti,   Rattan Lal Kataria has written personal letters to all MPs, both Lok Sabha and Rajya Sabha, to support the ongoing “Jal Shakti Abhiyan: Catch The Rain” campaign in their respective constituencies and states. The Abhiyan with the theme- “Catch the Rain where it falls, when it falls’ was launched by Prime Minister Shri Narendra Modi on the occasion of world water day – March 22, 2021.

The campaign aims at tapping rainwater by constructing artificial recharge structures, revitalizing existing ponds and water bodies, creating new water bodies, provisioning check dams, rejuvenating wetlands and rivers before the onset of monsoon. It is also planned to create a data-base of all water bodies in the country by geo tagging them and using this data to create scientific and data-based district level water conservation plans.

The letter gives about the details of the Abhiyan and also informs the MPs about the progress made already. It seeks their support and contribution in sensitizing people to conserve rainwater during the upcoming monsoon season. Shri Kataria informed that the aim of sending the letter is to urge each MP to turn as a brand ambassador for this Abhiyan in their respective constituency. “We all must come together and rise above the party lines to address the common problem of depleting ground water levels and water scarcity, in public interest.” Shri Kataria added.

National Water Mission, under the Ministry of Jal Shakti, is the nodal agency for its implementation and is tirelessly working involving all state governments and all big sized Public and Private enterprises to synergize their actions in this direction. The Ministry has coordinated with Ministries of Defence; Rural development; Environment, Forest and Climate Change; Agriculture; Housing and Urban Affairs etc and institutions under Railways, Airports authority of India, CPMFs, all PSUs, Public sector Banks, Universities etc which have vast tracts of lands under them to join hands to ‘Catch the Rain’.

In the last 2 months after the launch the Abhiyan has made noticeable achievements, despite the severe challenges posed by ongoing COVID-19 pandemic. Ministry of Rural Development has reported completion of construction of 1.64 lakh water conservation and rain water harvesting (RWH) structures, incurring an expenditure of Rs 5,360 crore, while work is in progress on 1.82 lac additional structures. 37,428 traditional structures and existing water bodies have been renovated till date with an expenditure of Rs 2,666 crore and 42,000 additional structures are expected to be rejuvenated shortly.

A total of almost Rs 14,000 Cr worth water conservation related work is completed/ongoing under the MNREGS of Dept of Rural Development. Ministry of Housing and Urban Affairs has renovated 1,258 RWH structures while adding 1.02 lac new RWH structures. Not limited to building structures, the Abhiyan has gone further to include crop diversification, afforestation and disseminating information on water use efficiency (WUE) under its mandate. The Department of agriculture has conducted 1,488 training sessions, through KVKs, training nearly 53,000 farmers on appropriate crop and WUE. Around 22,000 seed packets and 2,35,000 saplings have been distributed to urge farmers to shift to suitable crop.

“All this has been done fostering convergence amongst various departments and utilizing their allocated budgets, in line with the ideology of our Government – ‘Minimum Government – Maximum Governance” said Shri Kataria

The letter carries information as well as appreciation for dedicated cadre of Nehru Yuva Kendra, that is carrying out a robust awareness generation campaign in 623 districts. Training has already been accorded to 700 State/District level NYKS coordinators and around 2.27 crore people have so far participated in close to 16 lakh awareness generation activities organized through them.

Shri Kataria added that “The Prime Minister is leading from the front. He has written letters to all 2.5 lakh Gram Sarpanchs as well as Chief Ministers of all the states to actively participate and contribute towards the success of this Campaign. His efforts speak volumes about the firm resolve to work in the field of water conservation.  With these sincere efforts, supported by public participation, I am confident that soon we will be able to transform “Jal- aandolan” into a “Jan-aandolan.”

Jal Shakti Abhiyan-1 of 2019, which covered 1592 water stressed blocks in 256 districts of the country, was a first of its kind campaign where a team of technical experts from CWC and CGWB, led by a Joint secretary rank officer, visited field formations to sensitize local authorities about tapping rainwater. The results were overwhelming as successful interventions were made for rejuvenating existing water bodies and for harvesting roof top rainwater.