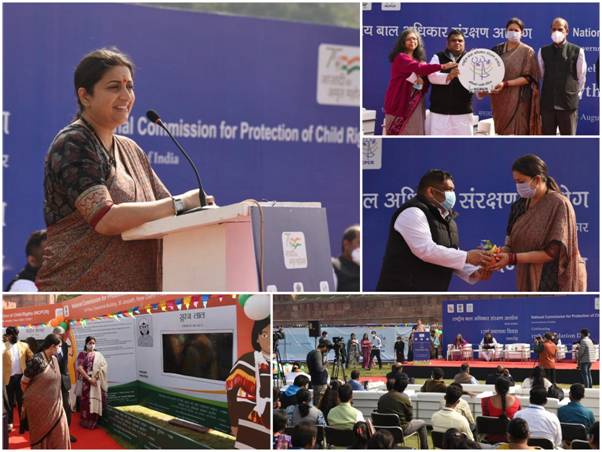 New Delhi: National Commission for Protection of Child Rights (NCPCR) as part of a series of regional meetings, today held the Northern Region Consultative meeting on “POCSO: Factors hindering the Implementation and aspects of assistance to victims” at Vigyan Bhavan, New Delhi. Representatives from the NLSA, SVPNPA, NFSU and BPR&D participated in the programme. More than 500 participants across Northern India i.e. Learned Judges of the District Courts, Advocates of DLSAs, Forensic Experts and Police officers from the States of Punjab, Haryana, Himachal Pradesh, Rajasthan, Uttar Pradesh, Uttarakhand and UTs of Delhi, Chandigarh, Jammu & Kashmir and Ladakh and SCPCRs attended the regional consultative meeting.

NCPCR has been organizing regional level consultative meeting with key stakeholders on POCSO.Regional consultative meetings have already been held in Odisha covering Bihar and West Bengal and also in north-eastern states of Assam, Manipur, Sikkim & Arunachal Pradesh. NCPCR has a mandate to monitor POCSO Act, 2012, Section 44 r/w & rule 12 of the POCSO Rules, 2020 whereby it monitors the status of implementation of the POCSO Act by seeking information from the States/UTs on the following 1. Setting up of Special Courts, 2. Appointment of Special Public Prosecutors, 3. Formulation of Guidelines by all States/UTs for the stakeholders for the implementation of the POCSO Act, 2012, 4. Designation and Implementation of module for training of police etc, 5. Steps taken by State Govt. for spreading awareness on POCSO Act and 6. Collect information and data on its own or from relevant agencies regarding reported cases of sexual abuse and their disposal under the processes provided under the Act.

Addressing the gathering at the inaugural session, Shri Priyank Kanoongo, Chairperson, NCPCR greeted all the participants with the new year wishes on the occasion of Gudi Parva and Ugadi and welcomed the Hon’ble Mr. Justice S. Ravindra Bhat and other dignitaries. He stated that POCSO is an exemplary piece of law for children as it not only penalizes the crime against children, but also provides provision for the rehabilitation process. He said that NCPCR and SCPCRs are continuously working for the welfare of the children and their rehabilitation. He said that during this consultative meeting, the gaps and loopholes existing in the process, hindering the implementation and aspects of assistance to victims will be discussed to find a way forward to achieve the optimum result in this matter in the best interest of children.

Shri Kanoongo requested all the participants to make a commitment that by next year we are able to address the key issues and focus on successful restoration and rehabilitation of child victims.

Hon’ble Mr. Justice S. Ravindra Bhat, Judge of Supreme Court of India expressed gratitude to Shri Priyank Kanoongo, Chairperson NCPCR for holding such consultative meetings on an important issue. This effort is well-timed given that we now have a decade worth of experience in the implementation of this Act. Shri Bhat highlighted the limitations in law in dealing with Acts that undermined the dignity and autonomy of women and children, ranging from behavior that is now termed “stalking” to pornography, or physical contact, and associated Acts, which were not the subject matter of any penal law, were recognized and appropriate legislative measures adopted, in other countries. These laws contain nuanced provisions criminalizing behaviour that involve unwanted physical contact of different types and hues, have the propensity to harass and discomfit women and minors (including minors of either sex), or demean them.

Shri Bhat also mentioned that the IPC was sought to be amended, which after 2012 enhanced existing punishments and also criminalized certain new offences – sexual harassment, forceful forced exhibition of pornography, criminal force with the intent to disrobe, voyeurism, stalking, etc.He emphasized that the state’s obligation cannot be shouldered by anyone else – it is the State which has to fill in these gaps, build infrastructure by setting up more special courts, and undertake capacity building to train and sensitize many stakeholders who are the backbone of this system.

He further added “POCSO Rules, 2020 mandates that the central and State Government, shall provide periodic training including orientation programmes, sensitization workshops and refresher courses to all persons, whether regular or contractual, coming in contact with the children, to sensitize them about child safety and protection and educate them regarding their responsibility under the Act. But what cannot be denied is that a very large part of the state’s obligation is financial in nature; to see improvement of the overall system, no matter how well-intentioned these Rules and policies may be, they will not suffice unless the State prioritizes allocation of large funds towards building a framework of care and rehabilitation for these child victims. As of May 2021: 640 Fast Track Special Courts, including 338 exclusive POCSO Courts have become functional in 26 States/UTs. However, a worrisome figure of pendency remains. Access to swift justice remains elusive, further prolonging the trauma faced by children. Being alive to this fact, by checking in with different stakeholders to rectify mistakes being made, resulting in inordinate delay, is thus imperative to ensure better functioning of the Act in the future.”

Shri Bhat concluded his address by highlighting a few priority areas i.e.  item-wise identification of priority areas, identify the needs of policies and strategies, flag whatever is needed including adequate funding and make it a document to work upon for the respective jurisprudence that may be administrator, police, judges or even any support person. This is an important platform of consultation to put the things together for future action.

In order to get diverse views, Technical Sessions were organized and the Commission invited representatives from various fields to deliberate on this important issue. Padma Shri Dr. Sunitha Krishnan shared her views about the role of the stakeholders in the legal process followed for POCSO victims. She stressed on proper training and sensitization of the stakeholders and the need of providing them with compensation and rehabilitation.Shri Anurag Kumar (IPS), Deputy Director – Training, Bureau of Police Reseach and Training (BPR&D) discussed in brief the procedure and the role of police in cases pertaining to POCSO and how these amount to miscarriage of justice. He also discussed at length the concept of double victimization and need for a less stringent Act.Dr. K.P.A Ilyas (IPS), Faculty Incharge, Centre of Children, SVPNPA expressed his views and ground experiences to explain the nature of training of police personnel. Shri Ashok Kr. Jain, Member Secretary, NALSA focused on providing the compensation to POCSO victims under various schemes and laws at different stages of the investigation and trials.Prof. (Dr.) PurviPokhriyal, Dean, School of Law, NFSUexplained the legal compliance of investigation in relation to the collection of forensic evidence and the challenges in collection of forensic evidence and stressed on the involvement and training of all the stakeholders.