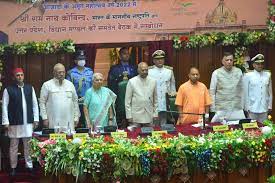 Speaking on the occasion, the President said that it gives him immense pleasure to address the members of the largest state legislature of the world’s largest democracy. The social, cultural, economic and geographical diversity of Uttar Pradesh makes its democracy even more prosperous. The population of more than 20 crore of this state presents a very good example of unity in diversity.

The President said that Dr Babasaheb Ambedkar used to say that we did not get the seeds of Indian democracy from the western countries, but it was visible in the working of the Sanghas formed during the time of Lord Buddha. Even in ancient times, there were examples of such democratic systems in Kaushambi and Shravasti, which was mentioned by Dr Ambedkar in his speech in the Constituent Assembly. The President said that the people’s representatives present in the House are the heirs of that ancient democratic heritage. It is a matter of pride for all of them but at the same time, they have the responsibility to carry forward the ideals of Lord Buddha and Dr Ambedkar.

The President noted that representation of different sections of the society has become much wider in the present Legislature which is a good achievement from the point of view of social inclusion. He, however, noted that the number of women members in the Legislative Assembly of Uttar Pradesh is 47, which is about 12 percent of the total 403 members. Similarly, out of the present 91 members of the Uttar Pradesh Legislative Council, the number of women is five, which is about 5.5 percent as of today. He said that there is huge potential for increasing the representation of women. Uttar Pradesh had created history with the election of the first woman Chief Minister in independent India. That historical event should be seen as an early example of women-empowerment and Uttar Pradesh should become a leading state in women empowerment.

The President said that Uttar Pradesh ranks first in India in food grains production. Similarly, it ranks first in the country in the production of mango, potato, sugarcane and milk. In recent years, there has been notable progress in road, rail and air connectivity in the state. The talented youth of Uttar Pradesh are setting the parameters of economic progress in other states and abroad. He said that there is huge potential in tourism, food processing, information technology and urban development in the state. In view of fertile land and natural conditions conducive to agriculture in Uttar Pradesh, great changes can be made in the economic condition of the state by focusing more on production as well as productivity in agriculture and on agro-based enterprises.

The President said that we are celebrating the Azadi ka Amrit Mahotsav to commemorate the 75th anniversary of independence. One of the objectives of this celebration is to remember our freedom fighters who are often forgotten and about whom all citizens, especially the young generation should know. There have been many such unknown and anonymous freedom fighters in Uttar Pradesh, about whom more information should be accessible. Dissemination of more information about the well-known freedom fighters would also increase awareness among the people. He said that lecture series could be organized in educational institutions in the memory of freedom fighters. People could also be made aware of their life stories through other mediums.

The President said that the legislature is the temple of democracy. People consider people’s representatives as the creators of their destiny. The people of Uttar Pradesh have expectations from them and they have the most important duty of living up to their expectations.  He reminded them that according to the oath, they are committed to work not only for the entire state but for the entire country apart from your respective regions.