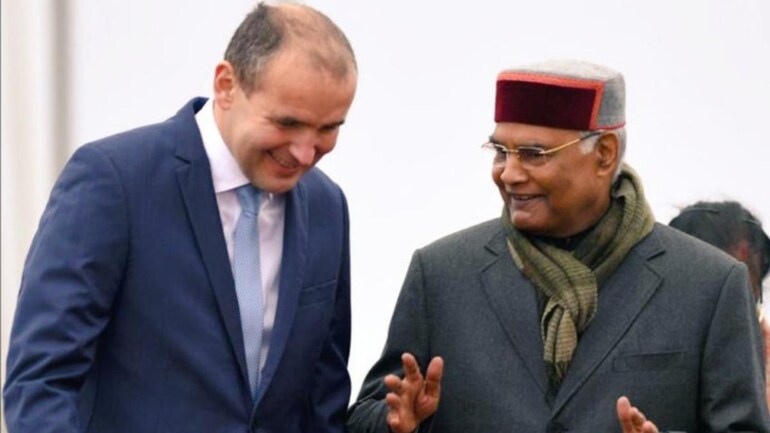 By Business Dunia Bureau
New Delhi: The President of India, Shri Ram Nath Kovind landed in Ashgabat, Turkmenistan, yesterday (April 1, 2022) in the first leg of his state visit to two nations – Turkmenistan and the Netherlands. On his arrival, the President was offered bread and salt by children as per the Turkmen tradition. Subsequently, the President of Turkmenistan, Mr Serdar Berdimuhamedov received the President and accorded a ceremonial guard of honour at the Ashgabat airport.

This morning (April 2, 2022), the President commenced his engagements by paying a visit to Oguzhan Presidential Palace where he was received by President Serdar Berdimuhamedov. During the one-to-one talk, the two leaders held a detailed discussion on the state and prospects of bilateral relations. They also exchanged views on various regional and international issues of importance. They have agreed to intensify efforts to further strengthen India-Turkmenistan’s multifaceted partnership. The President said that his visit, which is the first such visit by an Indian President, is special since it coincides with the 30th anniversary of establishment of diplomatic relations between India and Turkmenistan.

Speaking on the trade and economic cooperation, the President said that trade between India and Turkmenistan continues to be modest. While it has picked up this year, there remains a lot of untapped potential for enhancing and diversifying it. Our business community and officials need to work together on this. They should engage in more frequent and sector-specific interactions with each other to clarify business rules and regulations, document requirements, payment mechanisms etc. India-Central Asia Business Council was established in 2020 under the India–Central Asia Dialogue framework to facilitate regional trade. It is important for our apex Chambers to pro-actively participate in this forum and provide suggestions for taking economic cooperation forward.

Noting that Turkmenistan is planning to further develop its oil and gas fields as well as diversify its petrochemicals sector, the President said that India has made rapid technological advancements in all fields related to oil and gas. The technical and technological capabilities of Indian companies in downstream field could be utilized in further development of petro-chemical sector of Turkmenistan.

Referring to the digitalization drive in Turkmenistan, the President said that India is a global leader in digitalization of economy and service delivery. Turkmenistan may consider utilizing the expertise of Indian companies in its journey towards digital transformation.

Speaking about the cooperation between India and Turkmenistan in UN and other multilateral fora, the President said that there is a broad consensus between our countries on regional and global geo-political and economic issues. He appreciated Turkmenistan for its support to India’s candidatures in the recent past at the UN and other international organizations. He said that India counts on Turkmenistan’s support for its initiatives during India’s current membership at the UN Security Council for the term 2021-22.

Speaking on the regional issues, the President said that India stands for peace and stability as well as inclusive government in Afghanistan. In order to arrive at a regional perspective on Afghanistan, India convened the ‘Regional Security Dialogue on Afghanistan’ in New Delhi in November 2021. The first India-Central Asia Summit in January this year reaffirmed our strong support for a peaceful, stable and secure Afghanistan with an inclusive and representative Government.

The President said that any instability in Afghanistan is a threat to the whole region. Radicalization cannot be contained to a geographical region. Spread of radicalization, extremism and separatist would be a threat to regional and global security. Our collective approach has been articulated by UN Security Council Resolution 2593 which demanded that Afghan territory not be used for sheltering, training, planning or financing terrorist acts.

India and Turkmenistan signed and exchanged four MoUs/Programme of Cooperation in the fields of disaster management, financial intelligence, culture and youth matters in the presence of the two Presidents.

A press statement made by President Kovind on the occasion is attached.

In the afternoon, the President paid tributes at the Mausoleum of the First President of Turkmenistan, Mr. Saparmurat Niyazov and also laid a wreath at the Independence Monument in Ashgabat.

In the evening, the President met and interacted with ITEC/ICCR/Hindi Alumni/Friends of India group. Addressing the gathering, the President said that India considers Turkmenistan as part of its extended neighbourhood. India was one of the first countries to recognize Turkmenistan’s independence in 1991 and establish formal diplomatic relations in 1992. He said that in accordance with our belief that the whole world is one family, India has always been willing to share its experience and expertise with countries of the world, especially the developing world. The Indian Technical and Economic Cooperation, that is, ITEC programme was launched in 1964 with the main objective of assisting friendly countries in capacity building and training of manpower. He was happy to note that over 400 Turkmen citizens have so far benefitted from ITEC courses since 1993.

The President said that ICCR has been sponsoring undergraduate, graduate, postgraduate and post-doctoral studies for foreign students in various academic institutions across India. He expressed confidence that Turkmen students who have availed the ICCR’s scholarship scheme would have fond memories of their stay in India and have been able to secure gainful employment with the help of the degree earned through the scheme.

Speaking about the establishment of the Hindi Chair in the Azadi National Institute of World Languages in Ashgabat, in 2010, he was happy to note that there are many people now in Turkmenistan who can converse in Hindi fluently. He expressed confidence that ITEC/ICCR/Hindi Alumni/Friends of India group would always be there to support the political leadership in carrying out the vision for a strong and progressive cooperation between India and Turkmenistan.