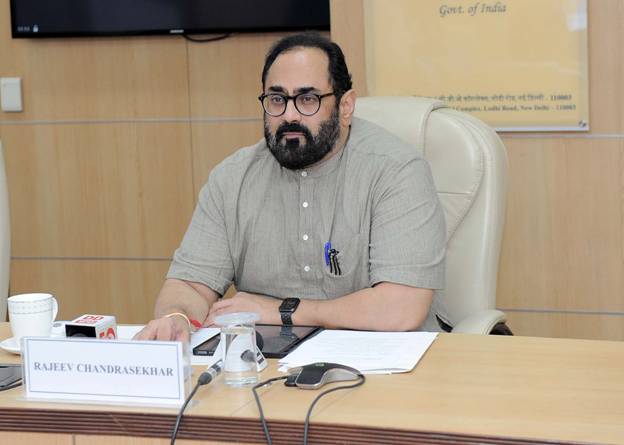 New Delhi: Shri. Rajeev Chandrasekhar,  Minister of State for Electronics & IT, Entrepreneurship & Skill Development has inaugurated 5 centers of the National Institute of Electronics and Information Technology (NIELIT) in the north east for skill enhancement of the educated youth in the region These five centers of NIELIT are in Dibrugarh, Dimapur, Jorhat, Pasighat and Senapati.

Inaugurating the Centres at a function held in Dimapur today, the Minister – on his third and concluding day of visit to the north east, said it is “our PM Narendra Modi Ji’s conviction to bring north east at par with other developed regions in the country”.

Remembering his earlier visit, the MoS said “there was only one entrepreneur in Software Technology Parks of India (STPI ) Kohima about seven months ago when he visited. Now the STPI Kohima is packed with entrepreneurs. And that’s the symbol or the sign of the future of Nagaland and the future of the north east.”

When the PM launched Digital India in 2014, he had three objectives, he said. First was using technology to transform the lives of ordinary citizens, thereby improving governance and democracy and the second, to create more opportunities for our youth, expand our digital economy and investments. The third objective was about creating global leadership capabilities in India.

The Minister further said that there has been a significant progress in using technology to transform our lives and our governance. We have already demonstrated that technology has enabled government and governance to deliver every rupee meant for every beneficiary directly to his or her account “without any corruption, without any leakage, without any delay”. “That is the power of technology”, he said.

On the second objective of creating more opportunities, it is clear from the last two years that if it was not for technology, ours would have been a far different response and many more lives and livelihoods and much more economic destructions would have happened.

In the last one year we have created almost 10 lakh new jobs in IT and electronics. Students having digital skills and digital training will get tremendous new opportunities in jobs and entrepreneurship in the new India. “We are a country that has created 100 unicorns, means a 100 billionaires. They are all youngsters who have worked and studied hard, created innovations, created wealth and prosperity for themselves.  That is the new India”, he said.

In his inspiring words the Minister said “when we say today new India means new opportunists and new prosperity, it means that the next unicorns can be from Nagaland, Kohima, Dibrugarh, Jorghat  or anywhere. It is all your capabilities. And in the centre of which that promise of Digital India ka Digital North East”.

The PM has said that the “future of India is technology and he has called the next ten years as India’s Techade”. To make India’s Techade a reality,  it will require the youth from Nagaland, Assam or any other region in the north east to join this digital India revolution.

The world is looking at India as a trusted partner of digital products and services. We are today a country that is going to do 400 billion dollars of electronic manufacturing and reach almost 12 % of global supply chains on electronics. We have grown 16% on a base of 200 billion dollars last year on technology services. It is time to be part of that revolution and grab the opportunities. “The world of opportunities is just in front of you and be prepared and be determined to avail them”- MoS said.

Shri. Rajeev Chandrasekhar also launched the NECB2.0 project, for capacity building and training in digital skill sets and current industry demanding technologies for various sections of society in the north eastern states. The project is funded by the Ministry of Electronics and Information Technology (MeitY), Govt of India.  National Institute of Electronics and Information Technology (NIELIT) is the Implementing agency, through its centers at Agartala, Aizwal, Gangtok Guwahati, Imphal, Itanagar, Kohima & Shillong.

Earlier in the day, the Minister visited the Nagaland Tool Room & Training Centre (NTTC) at Dimapur. He had inspected the facilities and ongoing projects there and assured all support and assistance from MeitY and Ministry of Skill Development & Entrepreneurship (MSDE) for grooming young entrepreneurs from the remote districts of Mon and Kiphire through the proposed extension centers.

The Minister also made a visit to IISC training Centre in Dimapur and interacted with the  trainers. The centre has successfully placed 7500 students in different sectors including in hospitality aviation.

Later in the day on 5th May, the Minister also chaired a review meeting with key officials of District administration Kiphire which is an aspirational District. He reviewed the progress of developmental and welfare programmes. He shared vision of PM Narendra Modi which is to catalyze development in these districts and make them models for others to emulate. He also assured support in sorting out connectivity issues both in terms of transport and data highway.