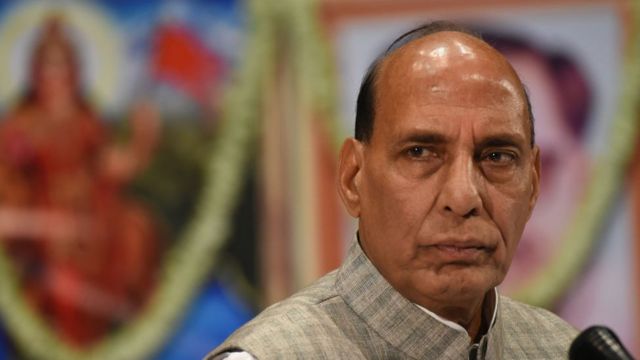 Safety and security of the country is Government’s top priority, says Raksha Mantri at diamond jubilee celebrations of Chetak helicopter at Hyderabad

New Delhi: Safety and security of the country is Government’s top priority and all efforts are being made to safeguard its unity and integrity,” said Raksha Mantri Shri Rajnath while addressing a conclave organised to commemorate 60 years of Chetak helicopter’s service to the Nation. The conclave ‘यशस्वत् षट् दशकम्’ on the theme ‘चेतक – आत्मनिर्भरता, बहुविज्ञता एवं विश्वस्तता के छः गौरवशाली दशक’ was organised by the Indian Air Force at Air Force Station, Hakimpet in Hyderabad on April 02, 2022. Chief of the Air Staff Air Chief Marshal VR Chaudhuri, senior retired & serving officers of the helicopter stream from the three services and officials of Ministry of Defence, Indian Coast Guard & Hindustan Aeronautics Limited (HAL) were present on the occasion.

The Raksha Mantri described the conclave as a fitting tribute to those who have served the Nation with hard work and dedication. Paying his respects to this invaluable contribution, he said, “Whenever a country fights a war for the safety and security, it is not just the Armed Forces who take part. The whole nation fights that war. The scientists, engineers and technicians of organisations like HAL, who develop helicopters like ‘Chetak’ and other platforms, play an equally important role as our soldiers. Lakhs of employees and workers associated with MSMEs also contribute by supplying parts to these projects. This conclave celebrates the hard work and dedication of all of them”.

Comparing ‘Chetak’ named horse of Rajput king Rana Pratap, Shri Rajnath Singh described ‘Chetak’ helicopter as not just a machine, but a vibrant & dedicated entity which has been continuously engaged in the service of the nation for the last six decades and has set an example for others. He noted that nearly 700 Chetaks manufactured so far have served the nation in war and peace with full dedication, describing its multi-service employment as a shining example of jointness.

Elaborating on the capabilities of the helicopter, the Raksha Mantri said, “’Chetak’ has proved its mettle in the battlefield by targeting enemies with accuracy and successfully landing troops. It has also helped in delivering essential logistics. It has saved precious lives through its evacuation efforts in case of emergency. It has provided important information whenever needed, which has helped in decision making and paving way for victory in wars. ‘Chetak’ has always been at the forefront in providing humanitarian aid and disaster relief during natural calamities. This is the first time a platform has reached this stage.” He appreciated the fact that ‘Chetak’, through adaptation, modification and upgradation, remains a frontline platform even after 60 years of its creation.

Shri Rajnath Singh recalled the extraordinary contribution of the Chetak helicopter during the 1971 war. “From providing air support to ground troops to heli-bridging operations and destroying enemy positions, our air warriors onboard ‘Chetak’ showed exemplary courage and professionalism during the war. The helicopter was also used to train the pilots of ‘Mukti Bahini’. Chetak’s role can also be seen as a shining example of promoting integration and jointmanship. Our victory in the war has been written in golden letters in the history books. Neither did we want any power, land, resources, nor any domination. We fought that war to protect humanity and democracy,” he stated.

The Raksha Mantri was of the view that India has shown its strength in the design, development and operation of helicopters in the five-tonne category, terming the indigenously designed and developed Advanced Light Helicopter DHRUV and its variants as examples of India’s prowess. He described the Light Combat Helicopter as another example of the country’s capability in light helicopters for combat operations. Light Utility Helicopters, being operated by the Armed Forces, are also great examples of the capability in the helicopter sector, he added.

Shri Rajnath Singh stressed on the need to march forward in the design and development of the 10-tonne Indian Multirole Helicopter which, he said, is a significant requirement for the Armed forces and has a huge market potential. He called to fast-track the design and development of helicopter technology in the country, terming it is one of the dual-use technologies which will not only prove to be effective in the defence sector, but will make India a dominant force in the helicopter market. “According to an estimate, there is a demand for more than 1,000 civilian helicopters in the country and an equal number of helicopters in the defence sector. We need to exploit this huge potential in the helicopter market. In addition, we need to make efforts to strengthen India’s claim in the Rotary wing domain. The era is changing. I am sure that in the times to come we will be more bright, strong and completely self-reliant,” he added.

The Raksha Mantri reiterated the Government’s resolve of achieving ‘Aatmanirbharta’ in defence production and preparedness, in view of the constantly changing global security scenario. “These days, there have been challenges in ensuring supply lines. External situation has affected the serviceability of critical weapons and equipment. Therefore, we are leaving no stone unturned to achieve self-reliance. Earlier, the country was dependent on imports from other countries to bolster the defence sector. This Government believes in strengthening our own shoulders to protect ourselves. We are making sure that India is not dependant of anyone,” he stressed.

Shri Rajnath Singh, however, maintained that by being strong, India does not mean to establish dominance in the world. He said, India has always followed the path of truth, non-violence & peace and does not support aggression of any kind. He stressed that the relationship between peace, security and military power has deepened in the country in the last few years. Underlining the importance of a strong security apparatus for nations to maintain peace in the world, he stated that in the last few years the Government has created an environment which has enabled the Armed Forces, scientists and defence manufacturers to think pro-actively and move forward on the path of making India strong and self-reliant.

The Raksha Mantri spoke on the major role domestic industry can play in achieving ‘Aatmanirbhar Bharat’ as envisioned by Prime Minister Shri Narendra Modi. “Free technology is being transferred to the private companies by DRDO. FDI limit has also been increased. Two positive indigenisation lists of defence items have been issued, while the third list will be out soon,” he said, listing out the measures being taken by the Government to encourage the participation of the private sector. He pointed out the huge positive response from the three services, research and development organisations and public and private sector industries. The MSMEs, start-ups, innovators and academia are together exploring new avenues of defence production, he said, exuding confidence of unprecedented response to the unprecedented steps taken by the government.

The conclave was organised to provide a platform to showcase six decades of helicopter operations in the country, highlighting the operations of ‘Chetak’. The event comprised reflections, narrations and discussions by prominent speakers from the veteran community and the Services.