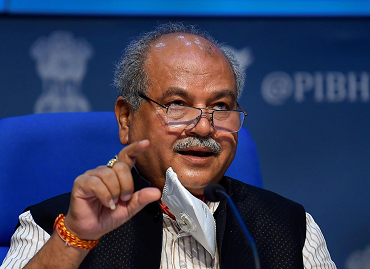 States should take advantage of the Agriculture Infrastructure Fund so that benefits can reach small and marginal farmers, says Shri Narendra Singh Tomar

New Delhi. :  On the 2nd day of the Chief Ministers’ conference on initiatives and schemes of the Ministry of Agriculture and Farmers’ Welfare, Union Minister Shri Narendra Singh Tomar emphasized that the Agriculture Infrastructure Fund is set up to drive infra investments and will facilitate and drive speedy sanctions through a user friendly online portal. He urged the states to take advantage of the fund so that the benefits can percolate to the small and marginal farmers who lack warehousing and cold storage facilities at the farm gate. Speaking about digital agriculture mission the Minister stated that farmers’ database is our wealth and will usher in focused programme delivery, reducing seepages, better policy formulation and smart farming in the country. Database with 5.5 crore farmers is ready and work is progressing for verifying others with land records. 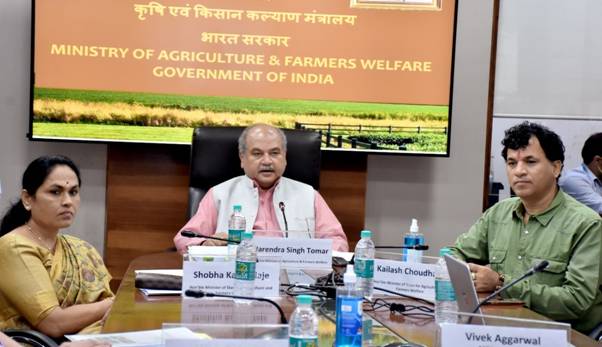 Shri Tomar informed that the Union Cabinet recently approved National Edible Oil Mission (NMEO-OP) for palm oilwith focus on the North-East regions and Andaman and Nicobar Islands. Through this, the production of edible oils will be accelerated in the country thereby reducing the import of edible oils. This mission will immensely benefit the palm oil farmers, increase capital investment, generate employment, reduce dependence on imports and increase the income of farmers.During the meeting, the states of Northeast appreciated the National Edible Oil-Palm Oil Mission started by the Central Government and assured their cooperation in its implementation at their level.

Shri Piyush Goyal while addressing the conference on the second day said that the central government is working in close alignment with the State governments to transform the future of farmers. He said that food security is synonymous with farmers’ security and reforms for farmers have put India on the path of AtmaNirbhar Bharat. On Agriculture exports the Minister said that exports have an important role to play in doubling farmers’ income and India should aim to become the top 5 agri exporting nations. Talking about ‘One District, One Product’, the Minister said that 106 products have been identified from 103 districts and districts should be promoted as export hubs to ensure that local goes global. He informed that red rice is now being exported to USA and Jackfruit from Tripura is being sent to UK. Free Trade Agreements are being worked out for better markets.

A presentation on themes of the conference was made by Additional Secretary Shri Vivek Agarwal. He outlined the vision AtmaNirbhar Agriculture that will transform farmers into entrepreneurs with higher income and better quality of life, make India the food basket of the world and make agriculture the go to investment opportunity. To achieve AtmaNirbhar Agriculture, 10,000 FPOs are planned to be set up, export oriented clusters, organic oriented clusters and digital agriculture would be set up. To bring about transformative change in agriculture discussions with the states centered around the Agriculture Infrastructure Fund, export of Agriculture products, self-sufficiency in pulses and oilseeds (Natural Mission on oilseeds and oil palm). PM Kisan and KCC data matching with focus on saturation of KCCs for small and marginal farmers and national farmers database with connectivity to state land records database.

Union Ministers of State for Agriculture and Farmers Welfare, Ms. Shobha Karandlaje and Shri Kailash Choudhary were present at meeting. The Chief Ministers and Agriculture Ministers appreciated the efforts made by the Central Government for the progress of the agriculture sector and gave their suggestions regarding various schemes and some regional problems. The state governments of the North-East have praised the new National Edible Oil Mission– ​​Palm Oil, saying that it will definitely bring a paradigm shift in the economy of their states. They thanked the Prime Minister Shri Modi and the Agriculture Minister Shri Tomar. The Government of Karnataka gave a presentation on the Crop Survey Project and APEDA gave a presentationon agricultural exports.