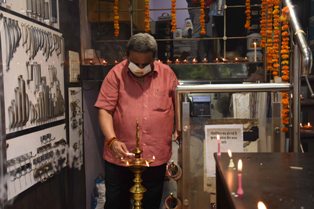 New Delhi. On the pious & proud occasion of beginning of construction of Shri Ram Temple today at Ayodhya by PM Shri Narendra Modi, crores of traders across Country under the umbrella of the Confederation of All India Traders (CAIT ) celebrated the by organising  Ram Naam Deep Utsav by lighting series of earthen lamps on their shops and homes and connected themselves with the beginning of the temple construction.

On this occasion, crore traders of the country decorated their shops with flowers and by lighting a series of earthen lamps written with the name Ram as a part of the Ram Naam Deep Utsav. At several shops, the burning earthen lamps also took the shape of Jai Shri Ram.  Along with this, recitation of Shree Hanuman Chalisa was also done and after performing the aarti of “Om Jai Jagdish Hare” and Shree Hanuman ji, they devoted themselves to Lord Shree Ram. On the other hand, Ram Dhun and Bhajan were also organized in many markets.

In a letter sent to the Prime Minister Shri Modi today, Mr. Praveen Khandelwal, Secretary General of the CAIT while giving gratitude to his efforts to make the temple possible, urged that now that a very historic event has taken place in the country today, the Central Government Now, from the year 1947 when the country was liberated, marking the history of India till now, collect in a time capsule and the said time capsule should be buried deep inside the ground in front of the Red Fort of Delhi in a way that this time capsule should remain safe  for the next one thousand years. Whenever this land is excavated, future generations should know about the glorious history of India.

Mr. Khandelwal said that a similar time capsule was burried by former Prime Minister Mrs. Indira Gandhi in front of the Red Fort in Delhi on August 15, 1973, for the next 1000 years, which was taken out by Mr. Morarji Desai’s government by digging the land in the year 1977 but nohing has been revealed till date from that time capsule.