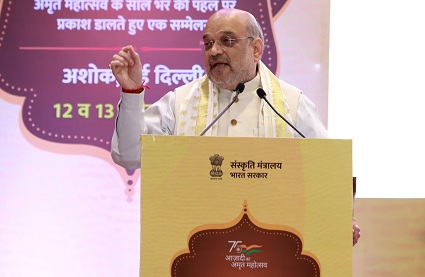 New Delhi: In the spirit of cooperative federalism, Centre, States and Union Territories will work together to make the events of Azadi Ka Amrit Mahotsav successful: Shri G Kishan Reddy.With more than 185 crore vaccine doses administered in the world’s largest vaccination programme, I hope to see renewed public participation in Azadi Ka Amrit Mahotsav programmes that are being conducted : Shri G Kishan ReddyOn the occasion of the Azadi ka Amrit Mahotsav, Ministry of Culture, Government of India, has organized the  two-day conference on April 12 and 13, 2022, in New Delhi today.

In his address on the occasion, the Union Home Minister said that perhaps after a generation, such a time comes in someone’s destiny that we can celebrate the Azadi Ka Amrit Mahotsav. We are all fortunate that in the year of the Amrit Mahotsav, we all have some duty with which we all have been privileged of being associated with. The nation has had many achievements in the 75 years since Independence and we have been successful in placing India amongst the top nations. We have created many records in all fields with joint efforts, we have been successful in preserving and promoting our history and culture. In the Azadi Ka Amrit Mahotsav, the Prime Minister Shri Narendra Modi, had envisioned its national celebration and that it should be a multi-purpose celebration.

Shri Amit Shah said that through the Azadi Ka Amrit Mahotsav, our new generation should get information about the sacrifices and resilience of the people who fought for the freedom struggle for 90 years from 1857 to 1947, they should be glorified. Along with this, the Prime Minister has decided to celebrate the period of 25 years from Azadi Ka Amrit Mahotsav to the Centenary year of independence as Azadi Ka Amrit Kaal. This next 25 years is a period for collective efforts of 130 crore people of India and to see India at the top of the world, the Prime Minister has called this period as Amrit Kaal. Along with this, he has also decided to celebrate the Azadi Ka Amrit Mahotsav as Sankalp Varsh and has called upon the people of the country that in the year of Azadi Ka Amrit Mahotsav, we should personally take some resolution, which will help India. Gram Panchayats, Parliament and all government departments should work for the country’s progress, as the 25 years of Amrit Kaal is a period to fulfil this resolve for progress.

The Union Home Minister said that On March 12, 2021, Prime Minister Shri Narendra Modi began Azadi Ka Amrit Mahotsav from Kashi Gandhi Ashram, thereafter more than 25,000 programs have been organized across the country. In this period, due to the second and third wave of Covid-19, difficult situation had arisen and many programs had to be done in hybrid mode and due to this public participation could not be as much as it should have been. But now that the country is coming out of the grip of Covid-19, in this remaining time we should celebrate the Azadi Ka Amrit Mahotsav with public participation. During this two-day conference, we have to decide how every village, tehsil, district and state should participate in the Azadi Ka Amrit Mahotsav and for this, to create programs and make them successful.

On the occasion Union Minister for culture and Tourism Shri G.K Reddy said “As Prime Minister Shri Narendra Modi has often said that Amrit Mahotsav of Independence is not just for the freedom movement and achievements of 75 Years of Independence rather this Mahotsav is a  celebration of new resolutions for Amrit Kaal which will be the next 25 years leading up to India@ 100. We have to make a successful roadmap for the upcoming 25 years at whose centre will be the youth of our country, because by 2047 it will be them who will be leading India and scaling new heights” The Union Minister also added “With more than 185 crore vaccine doses administered, in the world’s largest vaccination programme, I hope to see renewed public participation in the Azadi Ka Amrit Mahotsav programmes that are being conducted”.

Shri G.K Reddy further said that in the spirit of cooperative federalism, Centre, States and Union Territories will work together to make the events of Azadi Ka Amrit Mahostav successful

The 2-day conference aims to reflect on the progress of AKAM so far, gather best practices and ideate on the strategies to be adopted for the remaining period of the celebration, especially for upcoming crucial initiatives.

The success of AKAM depends critically on the “Whole of Government” approach that ensures involvement of every Ministry, State and Union Territory (UT) in this campaign, along with the counterparts abroad. In view of this substantial scale and involvement of stakeholders, the conference is being attended by Senior Government Officers from every State and UT.

The topics of discussion include landmark AKAM initiatives that involve mass public participation (Jan Bhagidhari) such as ‘Har Ghar Jhanda’, ‘International Yoga Day’, ‘Digital District Repository’, ‘Swatantra Swar’ and ‘Mera Gaon Meri Dharohar’. It also includes a session by the Ministry of Tourism focusing on its significant contributions to the AKAM campaign.

Azadi Ka Amrit Mahotsav (AKAM) is a flagship initiative of the Central and State Governments, which has been launched to commemorate 75 years of India’s independence. The objective of this programme is to recreate and renew the patriotic fervour of the independence movement, to recall the contribution of the freedom fighters and to create a vision for lndia@2047.