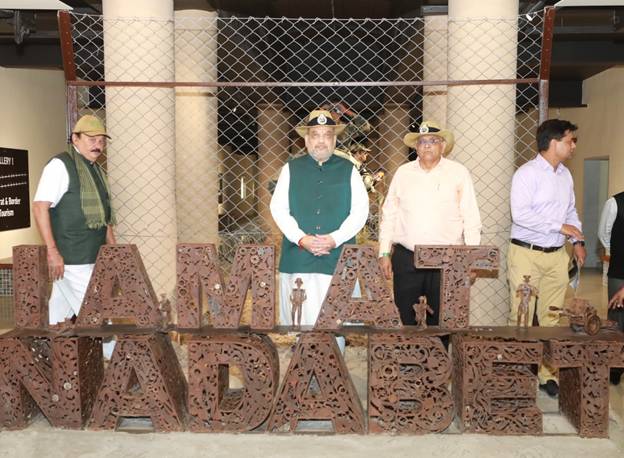 Happy Ram Navami to all countrymen, Maryada Purushottam Shri Ram’s life is the best ideal for how one should play every role in life

Lord Shri Ram lived a life in which he presented the best ideal of how one should play the role of an ideal son, ideal husband, ideal king and ideal commander without saying a word, so that people can live for years and years.

Today I have come to this border darshan tourist place of Nadabet, and wish to acknowledge the imagination of Prime Minister Shri Narendra Modi

No one can understand this multidimensional conceptand vision of Prime Minister Modi, until it is seen first hand

Under the leadership of Prime Minister Shri NarendraModi, government has been working to increase facilities of CAPF jawans and their families, from health checkup and housing satisfaction ratio to rationalization of duty

Under the Ayushman CAPF card, if any person in the family of a  CAPF personnel suffers from any disease, they can receive treatment using the card

Systematic efforts are being made to take the nation to the highest position in every field in the world, ever since Shri NarendraModi became the Prime Minister

This effort will be successful because our Border Security Force personnel are at the borders with protection of impenetrable security, you protect our borders, that is why development is possible on the borders

The nation and citizensbelieve in the BSF and that this force of 2,65,000 is a guarantee of the country’s security

There is no other Border Security Force exceptBSF that works in such tough conditions, to prevent infiltration in Kashmir Valley, to maintain internal security in North-East and in some LWE areas, to remain alert for hours in knee-deep swamps even in difficult areas of acreek

Children should imbibe the feeling of respect for our border guarding force as a rite of passage, andafter seeing the heroics of BSFthey should commit themselves tocontribute to national security

I wish to thank everyone in the BSF for fulfilling the slogan of duty for life and also want to salute your bravery, on behalf of the people

When we see the full demonstration site of Nadabet and from here to the border, it is only then that we understand how our border guards work to protect us in difficult circumstances

Tourism will recieve a boost and the huge problem of migration from the border villages will be removed and employment opportunities will also be generatedwhen people come here, this is the beginningof the process of reaching the last village on the border

The Gujarat government has spent . 125 crore on the SeemaDarshan program in Nadabet

I can imagine that after 10 years, this sector of Nadabet will become the focus of employment of at least five lakh persons in Banaskantha district

Children should visit Nadabet, and people coming here should stay at least for a night in Banaskantha and visit Banaskantha

Prime Minister, Shri NarendraModi has a big dream for border tourism, here the Beating Retreat ceremony will be the center of attraction

I am confident that the three objectives of border security through border tourism, public communication with border guards and a sense of attraction in amongst the people towards border guards will be fulfilled by this program

In his address on the occasion, the Union Home Minister said that any border guarding organisation, especially BSF, has a very difficult job. BSF personnel are guarding the 6,385 km long border of the country, fulfilling the mantra of lifelong duty with concentration in the midst of sand storms, scorching heat andextreme cold. Ever since Shri NarendraModi became the Prime Minister, efforts are being made in a systematic manner to take the country to the highest position in every field in the world. This effort will be successful because Border Security Force personnel are guarding our borders with the protection of impenetrable security, development is possible, as they protect the borders. He said that this is the border where BSF and Army personnel have shown excellent valour.In battle, the Border Security Force snatched ​​​​about 1,000 square kilometers from Pakistan and achieved victory. For a very long time, until a settlement was reached, the BSF was also involved in administration and organization, which started with 25 battalions in 1965, and is today a force of 2,65,000 personnel with 193 battalions and 60 artillery regiments. The country and its citizens believe that this organization and this force of 2,65,000 is the guarantor of our security.

The Union Home Minister said that infiltration should be stopped in the Kashmir Valley, internal security should be maintained in the North-East and some LWE areas, while maintaining cordiality in the relations between the two countries along the India-Bangladesh International Border. Security has to be maintained, even in the difficult area of ​​the creek, there will be no other border guarding force except BSF working in such difficult conditions.

Shri Amit Shah said that the Gujarat government has spent Rs. 125 crore on the SeemaDarshan program in Nadabet. Children should imbibe the feeling of respect for our border guarding force as a rite of passage, they should also decide that they should also contribute to the security of the country afterwitnessing the heroics of the BSF here. Now the Gujarat government is also going to plan that the focus of tourism for every student from 5th to 8th classis going to be Ndabet.With this, the message of BSF’s sacrifice, dedication, sacrifice and valour will reach civil society and when children grow up, this honor will be remembered by them lifelong. The Gujarat government is also planning living convenience in surrounding areas and every person in Gujarat spends at least 2 days on the outskirts of Banaskantha, only then shall they be able to understand the difficulties of border areas and will be able to understand the border areas.

Earlier, after inaugurating the newly constructed tourist facilities for SeemaDarshan at Nadabet, Shri Amit Shah while wishing all the countrymen a happy Ram Navami said that Ram Navami is the end of ChaityaNavratri as well as the birthday of a historic personality. Crores of people celebrate this festival in their homes. He said that the life of MaryadaPurushottam Shri Ram is the best ideal for how one should play every role in life. Lord Shri Ram lived such a life in which he presented such a perfect ideal of how one should play the role of an ideal son, ideal husband, ideal king and ideal commander without saying a word, so that people can live for ages. That is why he is our adored today, we all worship him in the form of God and try to follow the path shown by him.

The Union Home Minister said that Border Security Force jawans, guard the toughest borders, and protect the country by putting their lives at risk in difficult conditions. I want to pay tribute to them on behalf of the nation, by remembering all of them who have lost their lives. He said that today, on behalf of the people of the entire country, I want to thank everyone from the BSF jawan to the DG, who have fulfilled the slogan of lifelong duty and also want to salute their bravery. Shri Shah said that whenever there was a crisis in the country, BSF has always displayedvalor. One MahaVir Chakra, four Kirti Chakras, 13 Vir Chakras, 13Shaurya Chakras and the saga of many sacrifices are carried by BSF and the whole nation is proud of their bravery.

Shri Amit Shah said he wished to acknowledge the imagination of Prime Minister Shri NarendraModi at this border darshan of Nadabet. The vision of the Prime Minister cannot be understood and appreciated until one visits this place first hand. After coming here, when we will go to the full demonstration site of Nadabet and from here to the border, then only we will know how our border guards work to protect us in difficult conditions.Coming here will instil patriotism in children as well as a sense of belonging to our armed forces and the security of our borders. He said when people come here, tourism will receive a boost and a big problem of migration from the border villages will be removed and employment opportunities will also be generated, and this is a beginningof the process through which development taking place in the country will reach the last village on the border.. Shri Shah said that today he can envisage that after 10 years this sector of Nadabet will become the center of employment for at least five lakh people in Banaskantha district.

The Union Home and Cooperation Minister said that Prime Minister Shri NarendraModi has built three arrival plazas for tourists with furniture and interior work, made rest places, auditorium with capacity of 500 people, provided for changing rooms, 22 shops and restaurants have been built, decorative lighting is being built and 30 percent of the electricity here is solar based, thus creating a modern sector. Children’s play facilities and 100 feet high tricolor will all become a center of attraction here. There are 6 galleries that introduce the visitor to the nation’s borders. A gallery for Gujarat tourism and a gallery for Nadabet and Banaskantha have also been built. There will also be a gallery presenting the three wings of BSF; Marine, Air and Artillery.

Shri Amit Shah said Prime Minister Shri NarendraModihas a dream for border tourism. Here the Beating Retreat ceremony will become the center of attraction. He said that he has full faith that the three objectives of border security through border tourism, communication of people with border guards and a sense of attraction in the minds of the people towards the border guards will be fulfilled by this program. Shri Shah said Shri NarendraModi has taken initiatives for the security and infrastructure of our borders. Extending best wishes to all the people and especially the people of Banaskantha, he said that now Banaskantha will become the center of attraction not only for Gujarat but also for people across the country, due to Nadabet. It will also provide tourism facilities within the nation and people across India will have an opportunity to understand the valour of the BSF from close quarters.

Published in Communities news and Infrastructure