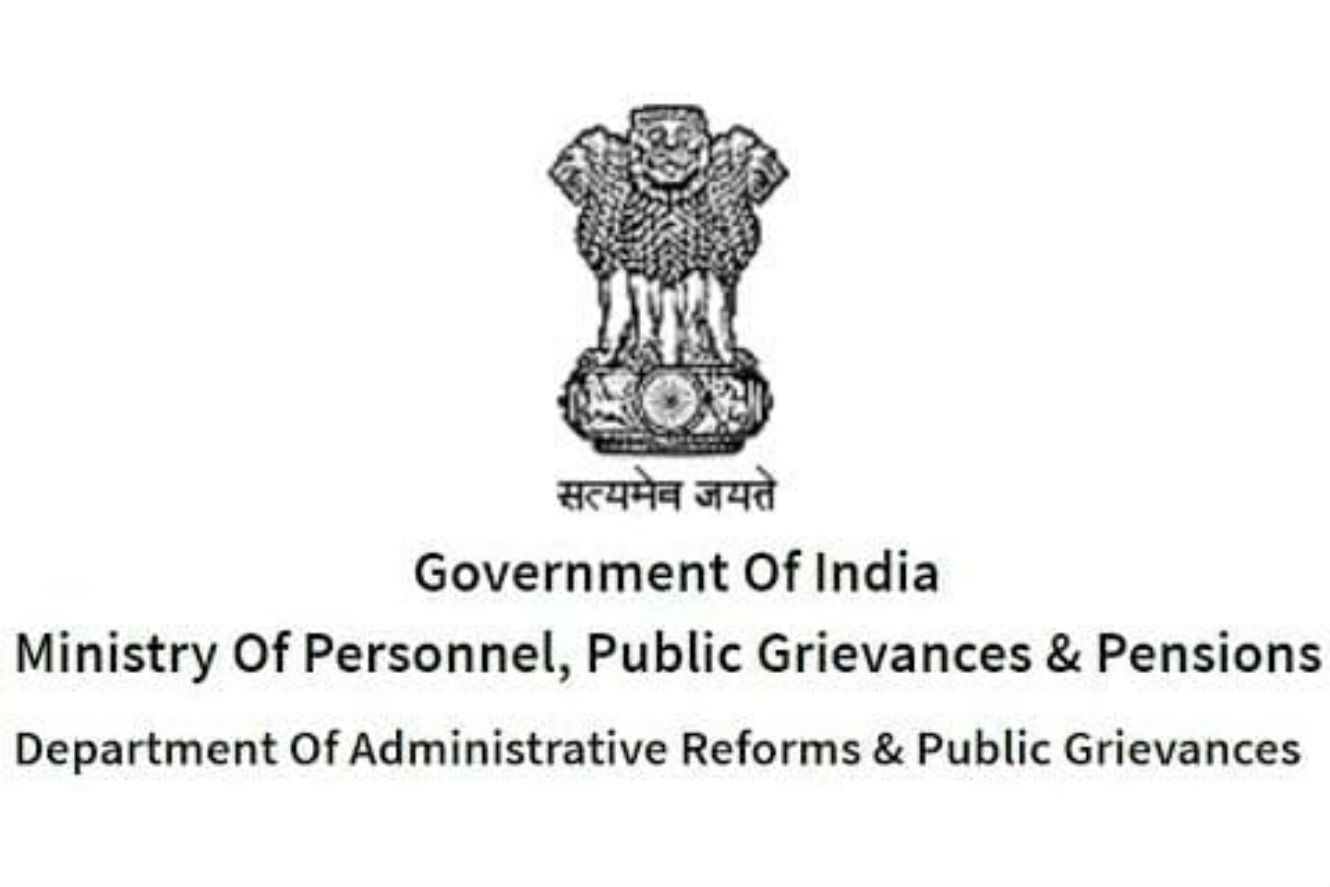 New Delhi: The Union Minister of State (I/C) Science & Technology; Minister of State (I/C) Earth Sciences; MoS PMO, Personnel, Public Grievances, Pensions, Atomic Energy and Space, Dr Jitendra Singh today lauded Central Information Commission for achieving consistent decline in pendency with corresponding rise in disposal of the Right to Information (RTI) appeals. He said, he was pleased to note that the pendency reduced from about 40,000 cases last year to around 27,000 cases at present, while the disposal of cases increased from 17017 in 2020-21 to 28901 in 2021-22.

Addressing the 14th Special General Body Meeting of National Federation of Information Commissions of India (NFICI) at CIC Bhawan here, Dr Jitendra Singh said, ever since Modi Government came into power in 2014, Transparency, Accountability and Citizen-Centricity became the hallmark of the Governance Model. He said that in the last eight years, every conscious decision was taken to strengthen the Independence and Resources of the Information Commissions. 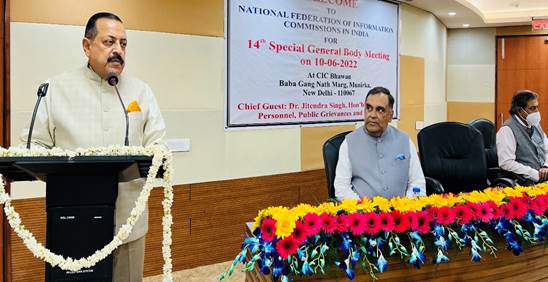 The Union Minister noted that empowered citizens are an important pillar of democracy and the Central Information Commission will continue to work for empowering the people through information.

Dr Jitendra Singh said, transparency and accountability are very essential for democratic and participative governance and all steps will be taken to fulfil the aspirations and expectations of the people of India. He said, today all major decisions and information are in public domain and we have achieved transparency with credibility, which is the hallmark of the Modi Government.

Dr Jitendra Singh said, the unprecedented pandemic posed a serious challenge to many Information Commissions including the Central Information Commission, but earnest efforts were made by CIC and SICs to dispose RTI second appeals and complaints and some Commissions even exceeded pre-Pandemic figures of disposal during certain periods. He also mentioned that June 2020 saw higher disposal of cases in CIC in comparison to pre-pandemic year of 2019. The Minister said, this became possible due to the innovative approach of shifting into virtual mode (audio-video) for hearing and disposal of cases. 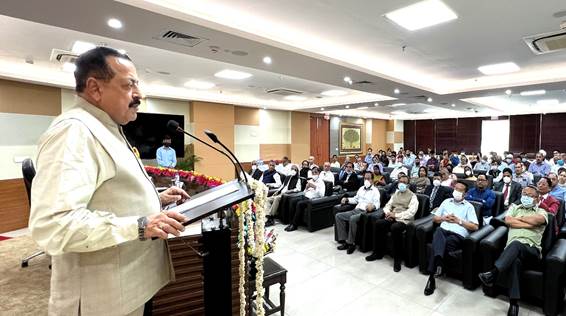 Dr Jitendra Singh also pointed out that it was during the challenging times of pandemic in May, 2020, the Central Information Commission started entertaining, hearing and disposing of RTIs from the newly created Union Territory of Jammu & Kashmir, through virtual means. He said, applicants from J&K and Ladakh were allowed to file RTI applications from home and even for appeals to the CIC. It is pertinent to mention here that consequent to the passing of J&K Reorganisation Act 2019, the J&K Right to Information Act 2009 and the Rules there under were repealed and Right to Information Act 2005 and the Rules there under were enforced from 31.10.2019. He also added that as far as J&K, the difference now is that non-Domicile or non-State subjects of Jammu & Kashmir are also entitled to file RTIs related to UT issues or agencies.

Dr Jitendra Singh referred to a number of new initiatives taken under the leadership of Prime Minister Narendra Modi to improve the functioning of the Central Information Commission and to ensure prompt disposal of RTI appeals. The Minister also noted that it was during the Modi government that 24 hours’ portal service was introduced for e-filing of the RTI applications during any part of the day or night and from any part of the country or abroad. It was during Prime Minister Narendra Modi’s tenure, he said, that the office of Central Information Commissioner was shifted to its own exclusive office complex. 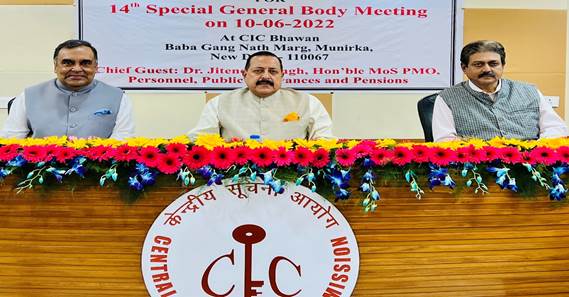 Dr Jitendra Singh said, another important area is the e-initiatives taken by the Commission in furtherance of Government policy towards e-governance. Technology has been harnessed for developing mobile based applications, e-filing, e-hearing, e-notification etc., facilitating the task of information seekers in availing remedies under the law.

In his address, Shri Y K Sinha, Chief Information Commissioner and President of NFICI said that it is important for the Commissions to ensure that the full potential of the laws empowering the common man is realized. Continuous outreach, seminars, train the trainers and so on have an important role to play in fulfilling this objective. He said, while much efforts have been made in this direction, the demographic and educational profile of the common citizenry, especially in remote and tribal areas should be kept in mind. Mr Sinha hoped that more such activities will be undertaken by all of you so that the benefits of the legislation percolate to the farthest corners of the country.