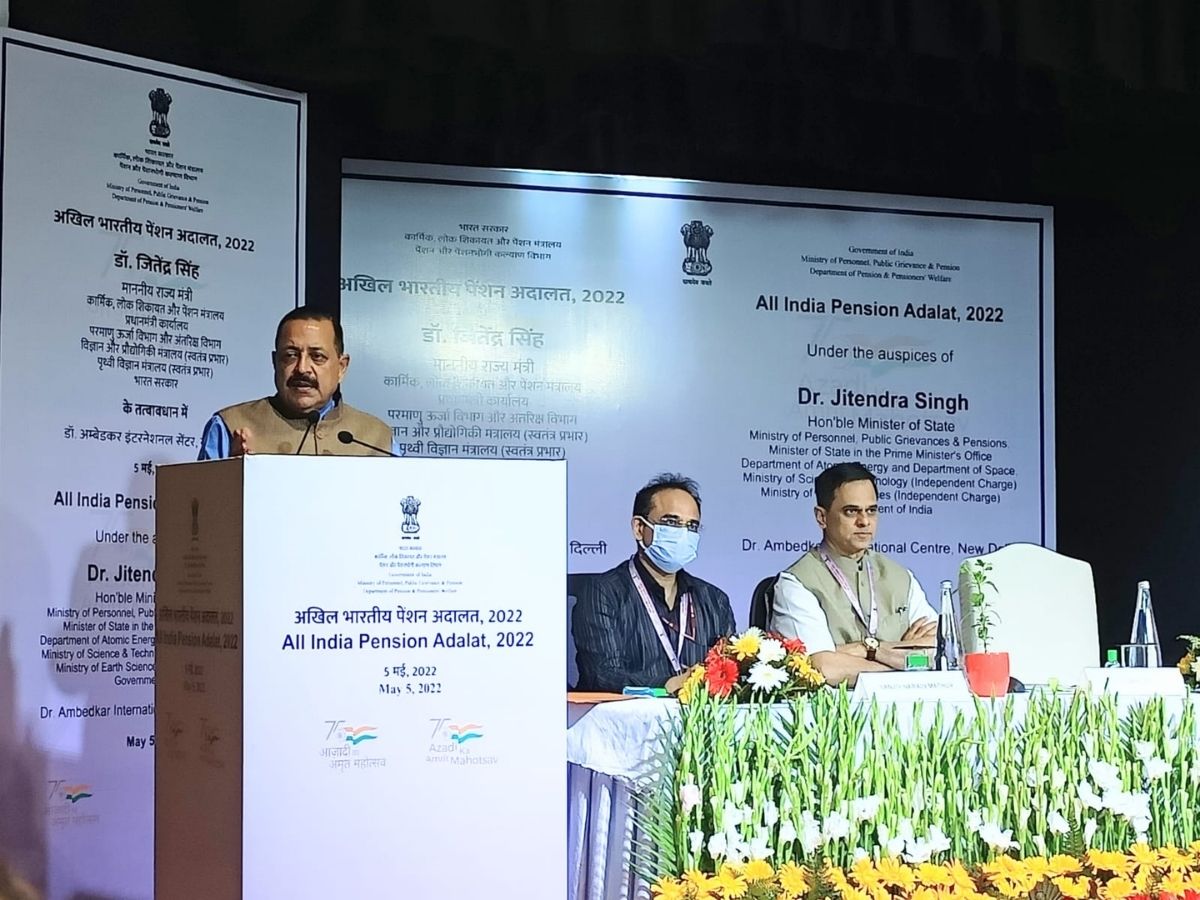 Addressing the 7th All India Pension Adalat in New Delhi, Dr Jitendra Singh said that steps like extension of Family Pension to differently abled child of a deceased Government employee/Pensioner or giving a major hike in the Family Pension emoluments for Divyang children of a deceased government servant/pensioner are not only pension reforms but these are social reforms having wide implications. Dr Jitendra Singh emphasised that under the leadership of Prime Minister Narendra Modi, the Government follows the Mantra of Good Governance for bringing “Ease of Living” to the common man. He said, under guidance of Mr Modi, out of box ideas and solutions are being devised for the well-being of pensioners. He said, the purpose of Pension Adalat is to resolve the grievances of beneficiaries in a prompt manner as well as to learn the procedural bottlenecks in disbursal of benefits.

Dr Jitendra Singh directed the senior officials of the Department to come out with a comprehensive “Manual for Pensioners” based on the feedback received from all the Central Ministries/Departments and Subordinate Offices for bringing further ease to pensioners. In the Pension Adalat, the Minister today randomly interacted and obtained feedback from the Pensioners, Staff and Officers dealing with the cases in Delhi and about 225 locations across the country. Over 1000 cases are listed today for the resolution and the Department is giving special preference to cases pertaining to family pensioners and super senior pensioners aged 80 years and above.

Dr Jitendra Singh said, the Pension Adalat initiative was started in 2017 by the Department which is leveraging technology for speedy resolution of Pensioners’ grievances. The model adopted is that all stakeholders to a particular grievance are invited on a common platform and the case is resolved as per extant policy. He informed that since 2017, some 22,494 pensioners’ grievances have been taken up and 16,061 matters resolved on the spot.

Dr Jitendra Singh in his concluding remarks said that the primary objective of the exercise is to provide “Ease of Living” to the Pensioners and to prevent litigation which involves financial stress to the pensioner as well to the Government and at the same time is a very lengthy process. It also creates an All-India impact and convey a message to all the Ministries/Departments/Organizations the importance this Government attaches to Pensioners’ individual grievances, the Minister added.

Dr Jitendra Singh recalled that the earlier Pension Rules were notified 50 years ago in 1972. Since then, a large number of amendments to the CCS (Pension) Rules, 1972 have taken place. He said, in the light of such changes and several office memoranda clarifying different provisions of these Rules, the Department has brought out a revised and updated version of the Rules i.e. Civil Services (CCS) (Pension) Rules, 2021.

V.Srinivas, Secretary Pension stated that the Department of Pension & Pensioners’ Welfare has ensured end-to-end digitization of the Pension payment process by making BHAVISHYA software mandatory for all the Ministries to process their pension cases. He stated that this software has laid out dead-lines for every stake holder to complete the Pension processing so that pension is started on time. All Ministries have been instructed that their Nodal Officers should conduct weekly review meetings of pending grievances ensure accountability of Government officials dealing with Pensioners’ grievances.