New Delhi: To mark the  16-day countdown to 8th International Day of Yoga  (IDY2022), a Common Yoga Protocol demonstration was organised at BHEL’s Noida township today under the aegis of the Ministry of Heavy Industries ( MHI). The event was aimed at creating awareness about the various dimensions of Yoga and its ability to enrich human lives.

Dr. Mahendra Nath Pandey, Union Minister of Heavy Industries presided over the event. Dr. Nalin Singhal, CMD, BHEL and Functional Directors on the board of BHEL were present on the occasion. Senior officials of MHI & BHEL, members of BHEL Ladies Welfare Association and a large number of employees and their family members from BHEL as well as from other CPSEs also participated in the event. The event was live streamed across all units and offices of BHEL and other CPSEs under MHI. Instructors from Morarji Desai National Institute of Yoga guided the participants with respect to yoga asanas at the event. 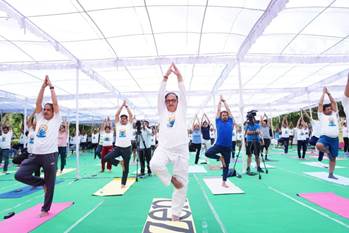 Addressing the gathering, Dr. Pandey highlighted that the initiative taken by the Hon’ble Prime Minister culminated in the UN declaring 21st June as the International Day of Yoga. As a result, it is celebrated across the world with great enthusiasm. He said  that Yoga, India’s gift to the world, can help prevent many common lifestyle diseases like diabetes, obesity, stress, heart disease, hypertension and lessen the impact of existing problems. The  Minister said that we must make Yoga an integral part of our lives. As a step in that direction, we are organising Yoga events to ensure Yoga becomes part of our daily routine.

On the occasion of World Environment Day, Dr. Pandey exhorted all present to realise and appreciate the value of trees in maintaining the environment. As part of a commemorative plantation program, he also planted a sapling in the BHEL township.