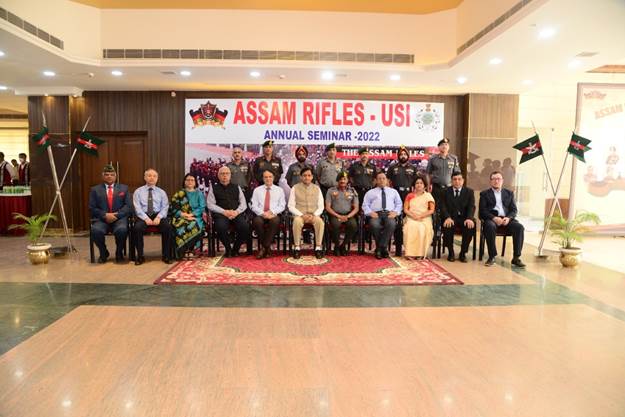 Union Minister of State for Home Affairs, Shri Nityanand Rai addressed a seminar organized by Assam Rifles on the topic ‘Economic growth is pre-requisite to address deeply rooted insurgencies in the Northeast’

New Delhi: It has also been seen that under leadership of Union Home Minister, Shri Amit Shah, talks with various extremist organizations, meetings with states, etc. have brought about a vast improvement in the security situation of the North East region and youth are rapidly joining the mainstream of development

It is our duty to take the North East towards development by working in the spirit of the Prime Minister’s motto of ‘Sabka Saath, Sabka Vikas, Sabka Vishwas and Sabka Prayas’

The Union Minister of State for Home Affairs, Shri Nityanand Rai, addressed a seminar organized by the Assam Rifles on the topic ‘Economic growth is pre-requisite to address deeply rooted insurgencies in the North East’ in New Delhi today. The seminar was attended by several dignitaries including Director General, Assam Rifles, Lt Gen PC Nair. In his address, Shri Nityanand Rai said that the seminar is an important annual event to provide a common platform for academicians, a comprehensive exchange of views on contemporary topics contributing to strategic issues related to the North East region.

Shri Nityanand Rai said that under the leadership of Union Home Minister Shri Amit Shah, talks with various extremist organizations and meetings with states have brought about a vast improvement in the security situation in the North East and the youth are rapidly joining the mainstream of development. In one of his speeches, Shri Amit Shah had said that the Modi government is committed to the all-round development of the North East region. An amount of Rs 2,65,513 crore has been spent from the year 2014 to March 2021 for the development of various infrastructure projects in the North East region, the result of which is visible in the form of  development.

The Minister of State for Home said that the study of North East communities gives a glimpse into the rich history, vibrant traditions and cultural values ​​of the diverse tribes living in the region. About 145 tribal communities are present in the North East, which is 12 percent of the total tribal population of India and 26 percent of the total population of the North East. It is a vast platform offering diverse ethnic cultures, different languages, diverse traditions and unique tribal identity to the region

Shri Nityanand Rai said that over the decades, the ideology of rebellion has shifted from social issues to political aspirations, hunger for unquestionable power and monetary gains. The innocent youths of the region got caught in the vicious cycle of pseudo-nationalism and weapons. The economic deprivation and lack of job opportunities coupled with drug menace pulled this generation further into the web of extremism. The practice of building social and economic incentives into the system is an essential condition, in order to dissuade them from violence and wrong ideologies. This can happen only when the political scenario and security situation in the region is conducive to the implementation of a well thought-out and comprehensive economic and infrastructure development plan with the aim of generating adequate employment for unemployed youth. Under the leadership of the Prime Minister, Shri Narendra Modi, this transformation has come in the North Eastern states and it has also yielded good results. Considerable progress has been made in the field of peace, employment and development. Infrastructure development and economic development have led to better connectivity which has initiated the financial stability and sharing of resources for the development of a stable, peaceful and prosperous region.

The Minister of State for Home Affairs said there is a strong political resolve and commitment today for the development of transport, highways, communication, power and waterways in the North East. Now the security situation is under control and people have started receiving the benefits of development and infrastructure projects. He said that it is the duty of all to take the North East towards  modern development by working towards the  Prime Minister’s mantra of  ‘Sabka Saath, Sabka Vikas, Sabka Vishwas and Sabka Prayas’.

Shri Nityanand Rai said that since its inception in 1835, the Assam Rifles has been instrumental in development and has contributed immensely in restoring normalcy in the North East. This force is doing good work shoulder to shoulder with the Indian Army and has done a commendable job of resolving very sensitive situations with great ease. The government has given the Assam Rifles the powers under the Narcotics Drugs and Psychotropic Substances Act( NDPS Act), it was a well thought out decision, as a result the Assam Rifles has confiscated narcotics substances and drugs worth of about Rs. 1,500 crore in the last one year.

The Minister of State for Home Affairs said that the Assam Rifles has so far planted about 31 lakh trees under the government’s tree plantation drive, which is the highest among all the forces under the Ministry of Home Affairs. Our aspirations to make the country a global superpower are motivated by its contribution to world peace and stability. He said we have been contributing to United Nations peacekeeping efforts for very long, but with the riflewomen team of Assam Rifles joining, another social and human dimension has been added to our commitment to the community of nations. I congratulate all riflewomen of the force who made this feat possible and look forward for even more better work from them in the future. Shri Nityanand Rai said the government is working for the welfare of the Ex-Servicemen and the Assam Rifles has removed hurdles faced by these soldiers in many areas by organizing several rallies for Ex-Servicemen in different part of the country. Assam Rifles also organized an ESM rally for ex-servicemen in Nepal.