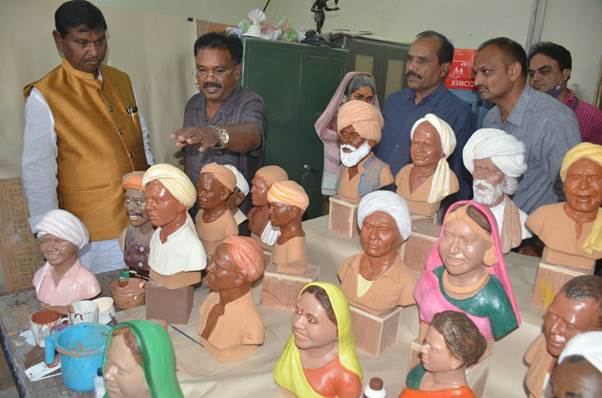 New Delhi: During his two day visit to Bhopal, Union Tribal Affairs Minister Shri Arjun Munda  today presided over the state level review meeting of tribal welfare at Rajiv Gandhi Bhawan, Bhopal. During the review meeting, the progress report of various schemes being run by the ministry in the state was presented to the minister through a presentation. During the review meeting, many schemes including Nutrition programme, Special Backward Tribes of the State programme, Pratibha Yojana, Akanksha Yojana, Housing Assistance Scheme were reviewed. Giving necessary instructions during the meeting, the Union Minister asked the officials  to optimise the use of data management system  so that the benefits of the schemes can reach the people in a better way. Union Tribal Affairs Minister Shri Arjun Munda also held an  interaction with the tribal students of National Law University, Bhopal. Most of the students he interacted with are recipients of the Top Class Scholarship Scheme sponsored by the Ministry of Tribal Affairs. After this, the Minister, while interacting with the beneficiaries of various welfare schemes, said that the present central government under the leadership of Prime Minister Shri Narendra Modi is fully dedicated to the development of tribal people. Everyone is getting the benefit of the efforts being made by the government for the welfare of the tribal communities, he explained. The Minister said that development should be for all sections of society.  He also added that people of the tribal community who have been living in  remote areas of the country with their cultural heritage in the traditional way since time immemorial, should be able to maintain their identity and continuity in it.  But at the same time, according to the changing world today, the tribal children should get the opportunity of education, health, and self-reliance in the true sense  .

Union Minister also  said “Today every person is playing his role in the development of the country, in such a situation, tribal society also has a definite role and we are happy that this society is playing its role in a meaningful way”. During the interaction, the beneficiaries mentioned the benefits received under various schemes and told that the schemes run by the ministry have played an important role in making their lives inclusive. During the conversation, the beneficiaries also gave some suggestions to improve the schemes. During his Bhopal visit, the Union Minister for Tribal Affairs Shri Arjun Munda also visited Tribal Research  Institute and reviewed the activities there. During this, the Minister held a detailed discussion regarding the work being done by Tribal Research  Institute, Bhopal and future plans. The work being done by the organization was praised by the Minister and it was also suggested that the various tribes residing in Madhya Pradesh should be studied and surveyed area-wise for development indicators so that it can be known that how they are lagging in education, health, social and infrastructure and other facilities.  This should be done especially for the special backward tribes of Madhya Pradesh, he said. Union Minister also suggested that a study should also be conducted on the tribal traditional system of medicine by the TRI and efforts should be made to bring them within the ambit of  Department of AYUSH. During the visit, the Minister also visited the tribal museum located in the institute. Shri Arjun Munda also reviewed the construction work of a museum dedicated to the tribal freedom fighters under construction in Chhindwara by the Tribal Research Institute. The mini museum located in the institution was also inspected by the Union  Minister.