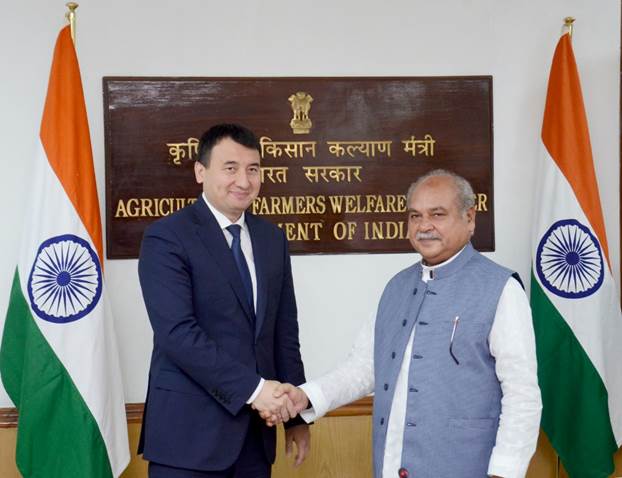 New Delhi: A fruitful discussion took place between the Deputy Prime Minister of Uzbekistan, Mr. Jamshid Khodjayev, and the Union Minister of Agriculture and Farmers Welfare, Shri Narendra Singh Tomar, in New Delhi today. During the meeting, it was agreed to take forward the ongoing cooperation in the Agricultural sector between the two countries.

Greeting Mr. Khodjayev on being appointed as the Deputy Prime Minister of Uzbekistan, Shri Tomar said that Mr. Khodjayev’s previous experience of being the country’s Agriculture Minister would be of great help in his new role. Shri Tomar said that the two countries have very good diplomatic and trade relations. While India’s diplomatic ties with Uzbekistan complete 30 years, for India it is the occasion of Azadi ka Amrit Mahotsav. Shri Tomar expressed happiness that special attention has been paid to mutual cooperation in the Agriculture sector. He informed that India has decided to provide market access for Grapes, Plums, and Sweet Cherries from Uzbekistan, notification for which will be published soon, while India has received approval from the Uzbek side for the export of Mangoes, Banana, and Soyabean Oilcakes, for which Shri Tomar thanked Mr. Khodjayev. Shri Tomar urged the Uzbek side to expedite the permission for the import of Pomegranate, Potato, Papaya, and Wheat.

Shri Tomar said that under the leadership of Prime Minister Shri Narendra Modi, the Agriculture sector is developing rapidly and work is being done with great enthusiasm on various aspects in the interest of farmers. Due to the farmer-friendly policies of the government, scientists and farmers, agricultural production has increased significantly in the country, and agricultural education and research in India are also in a very mature state. He said that Prime Minister Shri Modi wants the whole world to get the benefits of the development of agriculture in India.

Earlier, Mr. Khodjayev, congratulating India on the Azadi Ka Amrit Mahotsav, said that India’s experience in agriculture is very good, which Uzbekistan would like to know about including support to farmers. “Like India, we want to change the course of agriculture in Uzbekistan, for which we want to learn from India,” he said. In this regard, he requested the Indian Agricultural Research Institutes to pass on the benefits of research and development to Uzbekistan. Appreciating the growing trend of digitization in Indian agriculture, Mr. Khodjayev called for similar digitization in Uzbekistan, along with Indian companies. He also praised India’s Public Distribution System, Minimum Support Price (MSP) system, etc., and spoke about learning from India’s experience.

Published in Agriculture and Foreign Trade