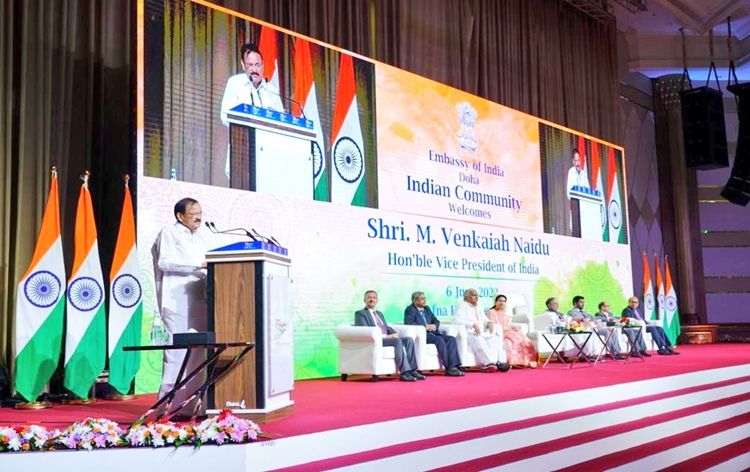 New Delhi: The Vice President, Shri M. Venkaiah Naidu arrived in Qatar yesterday, on the last leg of his ongoing three-nation tour. Shri Naidu is the first ever Vice President of India to visit the State of Qatar and was received by H.E. Soltan bin Saad Al Muraikhi, Minister of State for Foreign Affairs on his arrival at Doha airport. Thereafter, he was given a rousing welcome by the members of the Indian community at the hotel.

Highlighting that India and Qatar have historic ties built on mutual trust and respect, H.H. Sheikh Hamad bin Khalifa Al Thani, father of Amir of Qatar hoped that more investments can be made by Qatar in India and more industrial and business houses can establish economic ties with Qatar.  The Vice President and father of Amir agreed that there is a huge potential to diversify trade between the two countries, have comprehensive energy partnership; and a mutually beneficial investment partnership between India and Qatar.

Appreciating that Qatar’s investment in India has grown five times since March 2020, Shri Naidu opined, “it is still well below potential and can be substantially increased.” He also said that there is a keen interest in the private Indian business community to build partnerships with Qatar.

The Vice President lauded Qatar for emerging as an education hub in the region and expressed happiness over several Indian universities opening offshore campuses in Qatar. 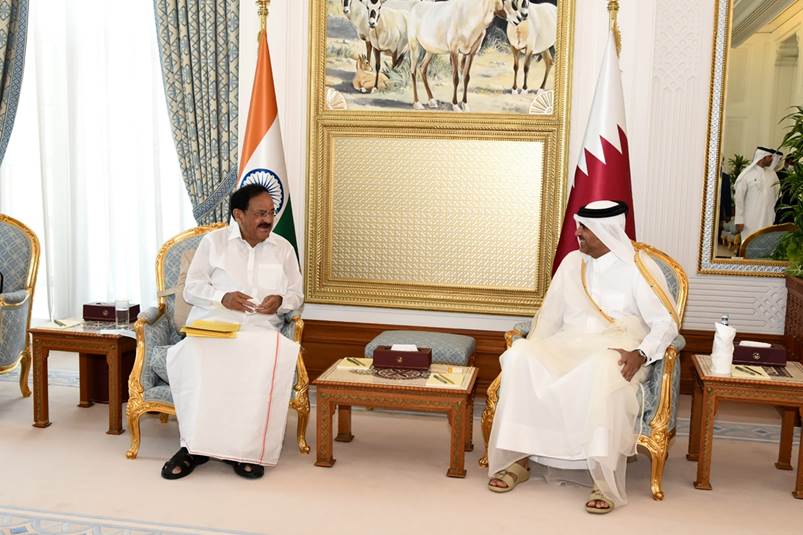 The Vice President further said that with nearly 800 US FDA approved manufacturing units, India takes pride in being the ‘Pharmacy of the World’, and supplies a large number of medicines to the US and Europe. He noted that India would also be happy to work with Qatar in the area of traditional medicine.

Observing that nearly 40% of our gas requirements are met from Qatar, Shri Naidu said that India deeply values Qatar’s role in its energy security and underscored the need to move beyond buyer- seller relationship into a comprehensive energy partnership.

Highlighting India’s focus on green development, the Vice President wanted Qatar to be India’s partner in this new journey.

Recognising that the pandemic has accelerated the digital transformation, Shri Naidu listed several achievements by India in this field such as digital payments. He underlined that this area has huge potential for collaboration between both the countries.

Congratulating Qatar for hosting the FIFA World Cup 2022 and on being selected as host nation for the Asian Games 2030, the Vice President called for more youth exchange programs between the two countries.

Emphasising that India attaches high importance to its deep rooted centuries old ties with Qatar, the Vice President said that the pearl trade and the dhows provided the deep connect that is reflected today in the commonalities of culture, cuisine and cinema.

Referring to the landmark visits by His Highness the Amir to India in 2015 and the Prime Minister Shri Narendra Modi’s visit to Qatar in 2016, Shri Naidu said that our relations are driven by close chemistry between the leadership of the two countries. He thanked Qatari leadership for taking care of the 7.8 lakh Indians in Qatar. We are happy to note that Indians are found in all walks of life and have become a part and parcel of Qatar’s developmental journey, he added.

On this occasion, Shri Naidu also reiterated the Indian community’s long standing request for a prayer hall and a crematorium in Qatar.

Mentioning that Qatar is not just among the countries with highest per capita income; but also the top gas supplier to the world, the Vice President said that he was deeply impressed with the strides being made by Qatar in its development journey.